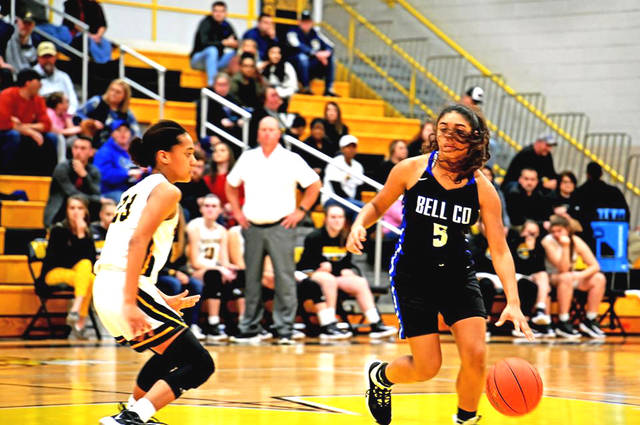 Nadine Johnson dribbles along the perimeter during Bell County’s 63-30 victory over Middlesboro on Friday. The eighth-grader finished the night with seven points.

Middlesboro couldn’t get anything going offensively on Friday as the Lady Jackets lost to crosstown rival Bell County 63-30. It was the second consecutive loss for Middlesboro while Bell County extended its current win streak to eight.

The Lady Cats were paced by the duo of Abby Harris and Talyah McQueen. Harris ended the night with a game-high 18 points while going 5-for-6 from the charity stripe. McQueen tallied 16 points with 10 coming from the free-throw line.

Bell County exploded out of the gate taking a 15-5 lead by the end of the first quarter. The Lady Cats extended their lead to 27 in the second with six players scoring in the period.

The Bell County defense stifled Middlesboro, holding the Lady Jackets to just six points in the second to take a 38-11 lead into halftime.

The Lady Cats outscored Middlesboro 25-19 in the second half to secure the victory.