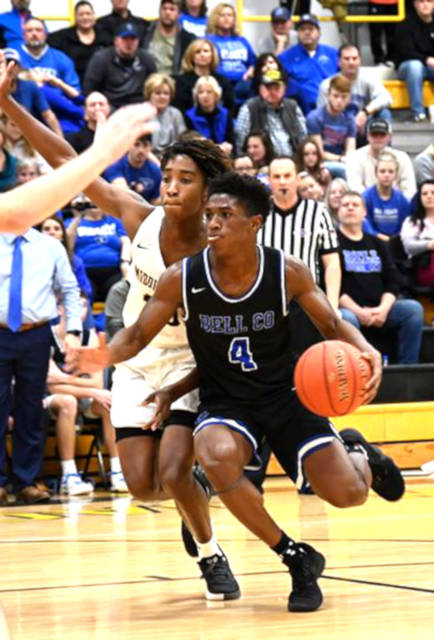 London Stephney drives to the basket against Middlesboro on Friday. He finished the night with 11 points, including the game-winning 3-pointer.

The rivalry game between Middlesboro and Bell County lived up to the hype on Friday. With seconds ticking off the clock, Bell County’s London Stephney got free off a pick on the perimeter and knocked down the game-winning 3-pointer to send the Bobcats home with a 46-43 victory.

It was the Cameron Burnett show offensively for Bell County as the sophomore finished with 20 points while shooting at a 66.7 percent clip. He was two rebounds shy of a double-double with eight.

The game was close throughout its entirety with the score tied at 19-19 heading into the break. The Jackets created some separation in the third. Led by Kyle’s seven points, Middlesboro pulled out to a 37-27 lead heading into the fourth.

Threes by Dawson Woolum and Dalton Stepp helped Bell County stage a comeback in the fourth quarter, allowing Stephney to hit the game-winning three to secure the victory.