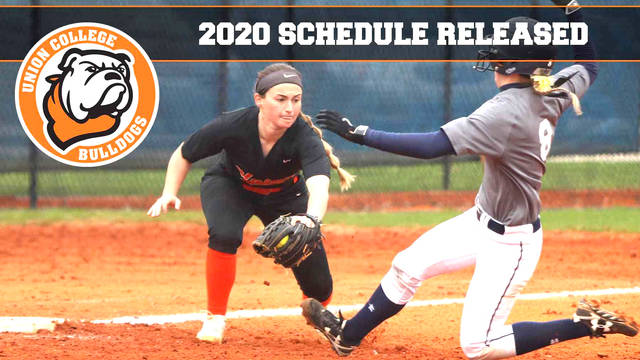 The Union softball team will began its 2020 season on Feb. 8.

BARBOURVILLE, Ky. — First-year head coach Alyssa Morris released the 2020 schedule for Union softball, and the slate includes 25 dates for a total of 50 games.

In all, the Bulldogs will host 14 doubleheaders while playing 11 away from Union Field.

Union will play nine times in February with seven twin bills at home. The season opener is set for Saturday, Feb. 8, as Georgetown College (Ky.) comes to Barbourville.

In March, the Bulldogs will become road warriors as nine of their 12 scheduled dates are away. Appalachian Athletic Conference (AAC) play also gets underway for Union in March with the league opener scheduled for Sunday, March 1, at Kentucky Christian University.

The Bulldogs went 31-20 overall and 20-6 in conference play last season, finishing second in the AAC regular season. Still, Union was picked to finish fifth in the AAC in 2020.

Union plays a 28-game conference schedule with seven of the doubleheaders at home and the other seven on the road. Here is a look at the Bulldogs’ league schedule: