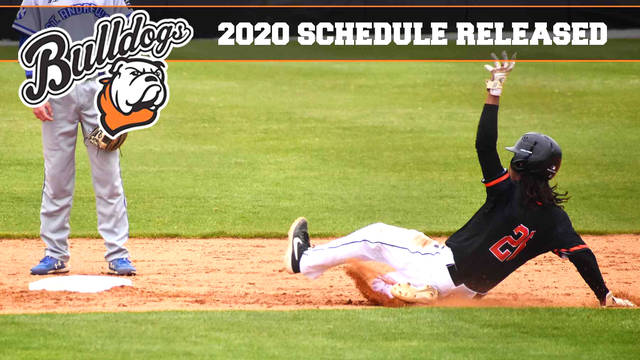 Union baseball is set to kick off on Feb. 1 with a doubleheader against Shawnee State University (Ohio) at noon.

BARBOURVILLE — Union College head baseball coach Bart Osborne and the coaching staff have announced the 2019 schedule, which is set to kick off on Feb. 1 with a doubleheader against Shawnee State University (Ohio) at noon.

In all, the Bulldogs are slated to play 55 games with 35 taking place on their home field of Jerry Carey Stadium in Barbourville, Ky. Of the 18 planned contests in February, all but two are home contests, as Union will travel to Columbia, Ky., on Feb. 18 and Williamsburg, Ky., on Feb. 25 to face Mid-South Conference opponents Lindsey Wilson College and University of the Cumberlands.

Union has arranged to face four ranked teams and two others who received votes in the NAIA Baseball Coaches’ Preseason Top 25 Poll. The ranked opponents are No. 1 and defending national champion Tennessee Wesleyan University, No. 11 University of the Cumberlands, No. 18 Bryan College (Tenn.), and No. 25 Campbellsville University (Ky.). Georgetown College (Ky.) and Reinhardt University finish out the top teams receiving votes during the poll.

The conference portion of the schedule begins at home on Feb. 28-29 as Montreat College (N.C.) comes to town. Five of the nine Appalachian Athletic Conference (AAC) are at home. The other home conference matchups are against Bryan on March 6-7, Milligan College (Tenn.) on March 20-21, Tennessee Wesleyan on April 3-4, and St. Andrews University (N.C.) on April 10-11. The away conference series starts on March 13-14 at Kentucky Christian University followed by Truett McConnell University (Ga.) on March 27-28, Columbia International University (S.C.) on April 17-18, and Reinhardt University on April 24-25.

The Bulldogs finished the 2019 season 27-25 overall and 13-14 in the AAC. Union advanced to the NAIA Opening Round for the first time since 2011 after defeating Truett McConnell during the AAC Conference semifinal game, giving the Bulldogs an automatic bid to the opening round.