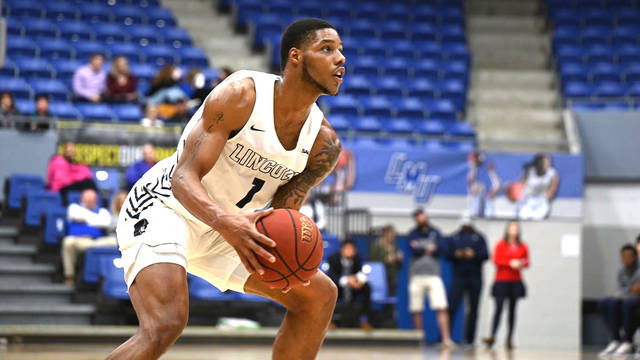 Courvoisier McCauley looks to pull up for a jumper during a previous game this year. He was recently named the SAC Player of the Week for his performance in a win over Lenoir-Rhyne.

ROCK HILL, S.C. — Lincoln Memorial University’s Courvoisier McCauley was nearly unstoppable last Wednesday night in the Railsplitters’ 97-77 home win over Lenoir-Rhyne and has been recognized by the league office as South Atlantic Conference AstroTurf Men’s Basketball Player of the Week. The sophomore guard willed LMU to remain perfect in conference play and inside Tex Turner Arena by scoring a career-high 44 points against the Bears.

Going 17-for-25 from the field and 8-for-10 from beyond the arc in the midweek SAC victory, McCauley’s 44 points were the most scored by a Railsplitter in a single game in LMU’s NCAA era and the most since Nick Sanford also scored 44 against Saint Michael’s in 1987. Furthermore, his 44 points tied for the seventh-most in a single game in program history. McCauley also pulled down a season-high 11 rebounds and dished out four assists in the triumph over Lenoir-Ryne to claim his third career double-double.

The 6-foot-5 swingman followed up Wednesday night’s performance by notching 14 points and a steal to help lead the Railsplitters to a gritty, 77-75 non-conference win at Kentucky Wesleyan Sunday afternoon. For the week, the Indianapolis (Manuel HS) native averaged 29 points on 61.1 percent (22-of-36) shooting, including 66.7 percent (10-of-15) from three-point distance, 7.0 rebounds and 2.5 assists. He is a major reason why LMU owns a 12-game winning streak heading into Christmas with a 12-1 overall record and an unblemished 5-0 SAC mark.

McCauley becomes the second Railsplitter to garner the league’s player of the week accolade this season as redshirt junior guard Devin Whitfield was tabbed SAC AstroTurf Men’s Basketball Player of the Week on Nov. 25.

LMU is currently on a 13-day break from game action for the holidays before beginning the new year and returning to SAC play Saturday, Jan. 4 at Newberry. Tip-off from inside Eleazer Arena in South Carolina is scheduled for 4 p.m.