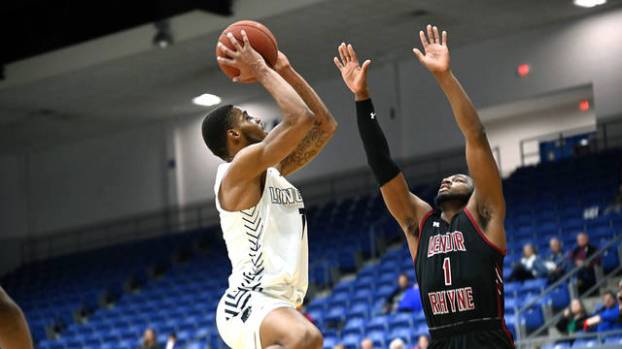 Courvoisier McCauley shoots over a Lenior-Rhyne defender during Wednesday’s game. McCauley’s 44 points are the most scored by a Railsplitter in a single game in LMU’s NCAA era and the most since Nick Sanford also scored 44 against St. Michaels in 1987.

HARROGATE, Tenn. — Sophomore guard Courvoisier McCauley was nearly unstoppable Wednesday night inside Tex Turner Arena on his way to putting on a performance for the ages. Willing the fourth-ranked Lincoln Memorial University men’s basketball team to a 97-77 South Atlantic Conference home victory over Lenoir-Rhyne, the Indianapolis native scored a career-high 44 points on 17-of-25 shooting from the floor and went 8-for-10 on three pointers.

McCauley’s 44 points are the most scored by a Railsplitter in a single game in LMU’s NCAA era and the most since Nick Sanford also scored 44 against St. Michaels in 1987. Furthermore, his 44 points are tied for the seventh-most in a game in program history.

Forced to utilize different lineups due to early foul trouble and without the services of starting senior point guard Anthony Brown, the Railsplitters scored 46 points in the paint and assisted on 25 of their 38 made baskets. Outscoring Lenoir-Rhyne 22-12 on fastbreaks, LMU got 10 second-chance points and outrebounded the Bears by nine.

Redshirt sophomore guard Cameron Henry knocked down a triple and made a jumper on back-to-back possessions as part of an 8-0 Railsplitter run early, giving the home team a quick 10-2 advantage after the first three minutes of play. After being outscored 12-9 across the following 4:30 as Lenoir-Rhyne trimmed the lead to five at 19-14, LMU went on a suffocating 13-0 run in a little over two minutes of action. McCauley led the Railsplitter charge with a trio of threes, giving the Blue and Gray a comfortable 18-point advantage at 32-14.

After the Bears chiseled the lead down to nine with just over four minutes remaining in the half, McCauley connected on another long ball to put LMU up 43-31. Moments later, a Henry jumper and a three pointer by redshirt junior guard Devin Whitfield gave the Railsplitters a 16-point lead at 50-34 with just about two and a half minutes to go in the half.

LMU entered the locker room with a 55-42 lead thanks to McCauley’s impressive 27 first-half points on 10-for-13 shooting and 6-for-6 marksmanship from outside.

An old-fashioned three-point play from Henry began the second half as the Railsplitters went back up by 16, but Lenoir-Rhyne would not go away quietly. The Bears outscored LMU 20-13 across a nine-minute span in the second half to get within nine once again at 71-62 on a three pointer from forward R.J. Gunn. However, the Railsplitters responded with a McCauley jumper and a Henry fastbreak trey.

Leading by 14 at 78-64 thanks to another McCauley jumper with 8:12 to go, LMU went on a game-securing 10-3 run over the next five minutes of play and held Lenoir-Rhyne without a made field goal for 6:29. A Henry layup put the Railsplitters up by 21 at 88-67 with 3:10 remaining and an emphatic two-handed behind-the-head dunk by Henry gave LMU its largest lead of the night at 23 with 13 ticks left.

For the eighth time in 2019-20, the Railsplitters reached 90 points and have now scored at least 92 in seven of their last eight games.

To go along with his career-high 44 points, McCauley claimed a season-best 11 rebounds for his third career double-double and chipped in four assists. Henry also scored a career high with 23 points on 10-for-15 shooting, knocking down a pair of threes and grabbing eight boards not to mention tying his career high with five assists.

The Railsplitters hit the road for one final game before Christmas break this weekend when they travel to Owensboro, Kentucky, to face Kentucky Wesleyan Sunday afternoon in a 3 p.m. EST tip-off from inside the Owensboro Sportscenter. Following Sunday’s non-conference road tilt, LMU will have 13 days off from game action before returning to conference play Saturday, Jan. 4 at Newberry.

Pineville finishes as runner-up in tournament