Pineville finishes as runner-up in tournament 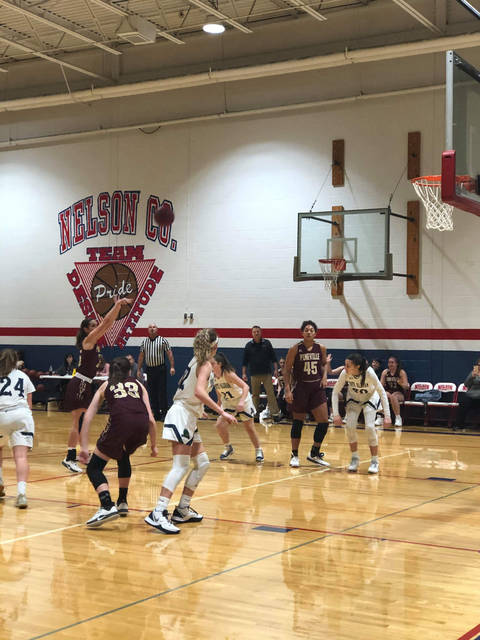 They defeated the South Oldham Lady Dragons 58-49 and the Elliot County Lady Lions 55-41 before falling to the Nelson County Lady Cardinals 54-50, securing a runner-up position for the tournament.

“I was very proud of the team throughout the whole tournament,” said Pineville coach Jamie Mills.

“I thought the South Oldham game was our best all-around game of the year,” he said. “I thought we took great care of the ball especially. It was probably our best game statistically in terms of turnovers. It was a great tone-setting game and a great way to get the tournament started.”

During the game against the Lady Dragons, Pineville junior guard Whitney Caldwell notched the 1,000th point of her career.

“I was very happy to see Whitney reach that milestone,” said Mills. “She has worked very hard and she has earned every point. She has been double-teamed and everything throughout her career and has still found a way to score. She’s a very hard worker and we are all very proud of her.”

Whitney’s mother Shannon says that her daughter has worked very hard to achieve a personal goal, but has maintained her team-oriented style of play.

“We are very proud of her because she is very team-oriented and very selective on her shots,” said Shannon. “Whitney has said from the first time she ever touched a ball that she had a goal of getting in the 1000-point club for high school, and knew it wasn’t easy.

“To see her achieve that dream as a junior without going shooting a bunch of crazy shots is great. We have always told her that the team comes first, and she knows without her team none of her personal achievements are possible. She was blessed by God with a talent to play a game she loves, and for that we are blessed.”

Caldwell says that she set this goal early on in life, but knew she couldn’t have made it without her team.

“From a young age, I always set a goal for myself to be in the 1,000-point club,” said Whitney. “I’m super blessed to have gotten this far and wouldn’t have been able to get there without my team and coaches pushing me to be the best I could be every game.”

Prior the Nelson County Lady Cards Hoops Classic tournament, Caldwell was leading the team in scoring with 17.4 points-per-game according to KHSAA.org. The statistics for the tournament have not been added.

“I think that was our most mature performance,” said Mills. “Everyone played very well and very smart. It showed a lot of maturation early in the season. I was very pleased with our effort.”

After advancing to the championship game, the Lady Lions fell to the Nelson County Lady Cardinals 54-50.

“We played a great game against a good team,” said Mills. “We just ran out of steam a little bit it seemed. We had the game down to a two-point margin with about two minutes left when Whitney fouled out. We traded buckets for a little bit and they made their free throws to keep it at a two possession game.”

“I’m very proud of how we played in the tournament. We have a lot of great players that are really starting to come into their own.”

Pineville will be back in action the day after Christmas. They are slated to take on an opponent that is TBD at 4 p.m. at Russell County in the first round of the Banker Hardwood Classic tournament.