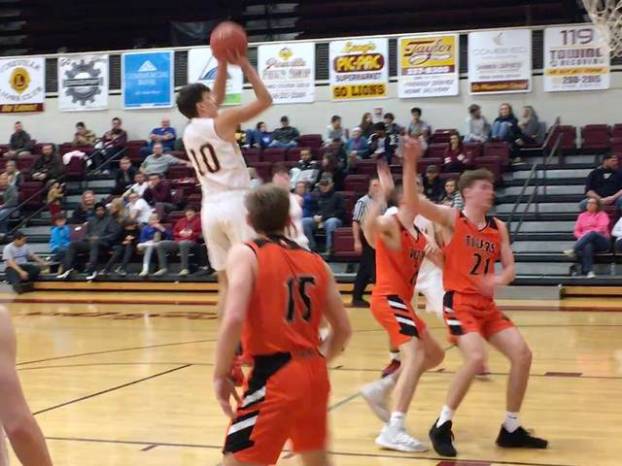 Clay Goodin connects on a jump shot for Pineville.

With over a dozen lead changes from start to finish, the Pineville Mountain Lions dropped a heart-breaker to the Pigeon Forge Tigers on Thursday night at home.

Pineville started the game with a 2-0 lead due to a pregame technical foul and eventually built a lead of 10 points. However, the Lions were never able to completely separate from the Tigers, allowing them to battle back and win by two points on a go-ahead shot to beat the final horn, 65-63.

“We played well enough to win, but we didn’t deserve to,” said Pineville coach Brad Levy. “50/50 balls, rebounding and effort hurt us. We just got out-muscled. They we’re doing things fundamentally and just pushing us out of the way.”

“We did play well enough to win, we just didn’t deserve to. It’s a shame to lose like that on the last play, but that wasn’t the reason we lost this game. It’s funny how when you play hard and with intensity, the ball bounces your way more often. They played harder and with more intensity than we did. They deserved to win.”

The game began with Pineville taking a 2-0 lead before even a second of game time had went by, due to a pregame technical foul on Pigeon Forge for dunking.

The Lions started the game on a 6-0 run, including the technical foul free throws before the game, before Staininger was able to connect on a lay-up for the Tigers, halting the Pineville run and bringing the score to 6-2 with 7:35 remaining in the first.

The Lions continued to play well offensively in the first, with Mason scoring nine points in the period. Staininger had all but two of Pigeon Forge’s 13 first quarter points. Pineville held a 21-13 lead at the first horn.

The Tigers opened the second quarter on a 7-3 run, allowing them to battle back to within four points at 24-20 with five minutes remaining before the half.

Pineville eventually grew the lead back to a nine point margin at 31-22 with three minutes remaining in the first half. However, the Tigers closed the half on an 8-2 run, allowing them to remain within three points of the Lions at halftime.

On the ensuing play, Creswell drove the length of the floor and netted a lay-up, giving Pigeon Forge their first lead of the game at 39-37 with just under four minutes remaining in the third quarter. Keean Fuson connected on a four-foot jump shot to tie things up at 39-39 just moments later.

The teams traded buckets, and the lead for the remainder of the third period, with Pigeon Forge holding at one point advantage heading into the final period, 50-49.

Pigeon Forge gained contributions from Al-Sultani, Creswell and Wilkinson in the fourth quarter, to help relieve some of the pressure on their leading scorer, Staininger.

With Pigeon Forge holding a 63-61 lead with 14 seconds remaining, Phipps connected on a 15-foot jump shot to tie the game. The Tigers called a timeout to draw up one final play.

With time running out, Pigeon Forge threw a pass inside to Staininger. He caught the pass behind the Pineville defender and was just able to get the ball off before time expired. The shot rolled from backboard to rim and eventually through the net, allowing Pigeon Forge to steal away the victory 65-63.

“This game was a big letdown for me personally,” said Levy. “We played well enough to win, but again, we didn’t deserve to. It was a total system failure and that starts with me.”

“We’ve got some really tough kids,” he added. “We just didn’t get things done tonight. Dalton Mason played a great game for us, and I’m proud of our effort. We just didn’t do enough to get the win. We will get back to work and move on to the next game.”

With the victory, Pigeon Forge improved to 4-3 on the season. They are slated to take on Floyd Central (TN) on Dec. 27 at home.

Coming off of back-to-back wins, the Pineville Mountain Lions tallied their third loss of the season on Tuesday night after... read more