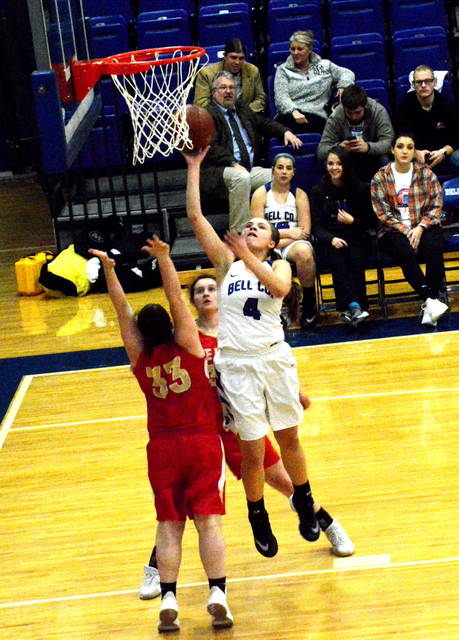 Abby Harris shoots a layup during a game last season.

Three days after suffering their first loss of the season, the Bell County Lady Cats notched their fourth win of the year against the Harlan Lady Dragons with an emphatic 61-32 victory on the road.

“This was a good district win for us,” said Bell County coach David Teague. “I thought our defensive intensity was good throughout the game, especially the second half.”

“The girls played hard and executed the things we were trying to do. It’s good to be 2-0 in district play heading into the Christmas break.”

The Lady Cats were led by Talyah McQueen, who notched another double-double with 18 points and 10 rebounds. She was followed by Ashtyn Meyers, who’s 10-of-17 night shooting allowed her to finish with 16 points. Abby Harris connected on 7-of-12 of her shots, allowing her to post 14 points in the winning effort. Abby Jackson added four, Abigail Cornett added four, Mataya Ausmus added three, Nadine Johnson added two and Sara Kidwell added one.

With the victory, the Lady Cats improved to 4-1 on the season. They were slated to play North Hardin at North Bullitt in the Wesbanco Bank Holiday Classic on Friday. They will play on Dec. 21 and Dec. 22 as well, with times and opponents TBD.

With the loss, the Lady Dragons moved to 2-3 on the year, but have since defeated the Claiborne County Lady Bulldogs in the first round of the E.R. “Doc” Gray Classic, to improve to 3-3. They were slated to take on Jenkins in the second round on Friday night at 7:30.