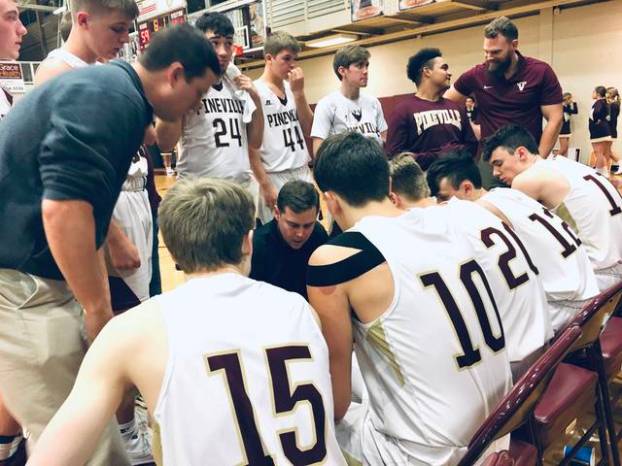 Coach Brad Levy draws up a play for the Mountain Lions in the closing seconds of their game against OBI on Tuesday night.

Coming off of back-to-back wins, the Pineville Mountain Lions tallied their third loss of the season on Tuesday night after falling to the visiting Oneida Baptist Institute Mountaineers, 61-59.

Oneida Baptist Institute owns two of Pineville’s three losses on the year, with the losses coming by a combined six points. They fell to the Mountaineers 63-59 earlier this season in the 13th Region All “A” Classic for a chance to play in to the All “A” tournament in January.

The Mountain Lions were led in scoring by Clay Goodin 23. He was followed by Sean Phipps with 17, Dalton Mason with eight, Keean Fuson with seven and Landon Couch with four.

The Mountaineers had four players in double digits, led by Jacob Hall with 14 points. He was followed by Elijah Woods with 13, Austin Simpson with 12, Sochi Onuoha with 10, Hamilton Tarapo with nine and Wayne Estep with three.

“They rebound the ball well,” said Pineville coach Brad Levy. “They do a good job at attacking the basket. They’re a very physical team. I’m proud of our guys. They battled back and never gave up — that’s all you can ask for in that situation.”

OBI played their best quarter of the game in the second. Onuoha, Simpson, Woods, Hall and Tarapo elevated the Mountaineers past the Lions, outscoring the home team 19-15 in the second period to take a 31-28 lead into the half.

After a quick bucket from Pineville, OBI went on a quick 4-0 run to extend their lead to 35-30. Goodin cut to the basket and delivered a layup on a pass from Mason to cut the lead to three at 35-32.

On the following play, Phipps blocked Woods, allowing Pineville to come up with the ball. Phipps drove down court to find Mason in the corner for three, bringing the Mountain Lions back to within four at 39-35.

Each team traded a bucket to keep the margin at four points, before Hall connected on a contested layup. He stepped to the line and connected on the free throw, giving OBI a 44-37 lead with just over two minutes remaining in the third period.

The Mountaineers added one more bucket before the end of the quarter to give themselves their largest lead of the game at 46-37 heading into the final frame.

Pineville wasted no time in chipping away at the lead. In the opening seconds of the third period, Phipps delivered a 5-foot jumper and was fouled in the process. After completing the “and-one,” the Mountain Lions were back to within six points at 46-40.

Goodin brought them even closer with a 15-foot jumper to decrease the gap back to four points at 46-42. After a trip to the charity stripe for the Mountaineers, they had pulled back out to a five-point lead at 47-42.

Pineville found their next three points on the free-throw line as Phipps connected on 1-of-2 and Goodin connected on 2-of-2, bringing the Mountain Lions even closer to the Mountaineers at 47-45 with five minutes remaining.

Each team traded buckets on their following possessions to keep the game within two points, 49-47.

On the ensuing Pineville possession, Goodin connected on a three-point basket to give the Mountain Lions their first lead of the game since the end of the first quarter at 50-49.

To start the fourth, Woods connected on a 3-pointer for the Mountaineers, giving them the lead at 52-50 before Hall further extended the lead to 54-50 on another inside basket.

Phipps drove the length of the court for a two-point bucket to keep the Lions within one possession at 54-52 with 1:52 remaining in the game.

The Mountaineers continued to attack the interior successfully as they extended their lead back to two possessions on a back door cut-and-score by Hall. OBI led 56-52 with just over one minute remaining in the game.

After Hall connected on both of his free-throw attempts for the Mountaineers, Phipps answered with a pair for Pineville, keeping the score within four points at 58-54.

Tarapo was sent to the line for OBI and connected on the front end of a pair of free throws, allowing the Mountaineers to maintain a five point advantage at 59-54 with 25.5 seconds remaining in the game.

With both teams in the bonus, they continued to send each other to the charity stripe. Phipps connected on a pair of free throws with 17.3 seconds remaining to keep Pineville within one possession 59-57.

One more trip to the line saw OBI score their final points on a pair of successful free throws, giving them a 61-57 lead with under 10 seconds remaining. In the same play, Onuoha was called for a technical foul for throwing the ball at Fuson.

This allowed Phipps to step to the line and deliver on a pair of free throws, bringing the Mountain Lions back to within two points.

With under five seconds remaining, Phipps drove up court and passed to Fuson who then attacked the rim to draw defenders into the paint. He then dished the ball out to an open Goodin who attempted the game-winning shot with time expiring.

The shot rimmed-out and fell to the hardwood.

“In the end, we just dug ourselves a little bit too deep of a hole,” said Levy. “But, we fought the whole game and battled back. We had a shot in the air to go-ahead and win the game with time expiring. Sometimes they fall, sometimes they don’t.”

“These guys just don’t quit. Sometimes the ball isn’t going to bounce your way. You have to learn how to handle that. Eventually, the worm will turn and things will start to click. I hate that the shot didn’t fall at the end, but that’s not the reason we didn’t win the game. There were plenty of opportunities to get us back on top. We just didn’t capitalize on them.”

With the loss, the Mountain Lions moved to 4-3 on the season. They are slated to take on Pigeon Forge, Tenn. at home on Dec. 19, with tip-off slated for 7 p.m.

With the victory, the Mountaineers improved to 6-3 on the season. They will take on Notre Dame out of Tennessee at Gatlinburg-Pittman High School on Dec. 19 in the Smoky Mountain Classic.

Unable to handle the basketball in two losses to open the season, the Harlan County Lady Bears found much more... read more