Lady Cats pull away in second half for victory over Harlan 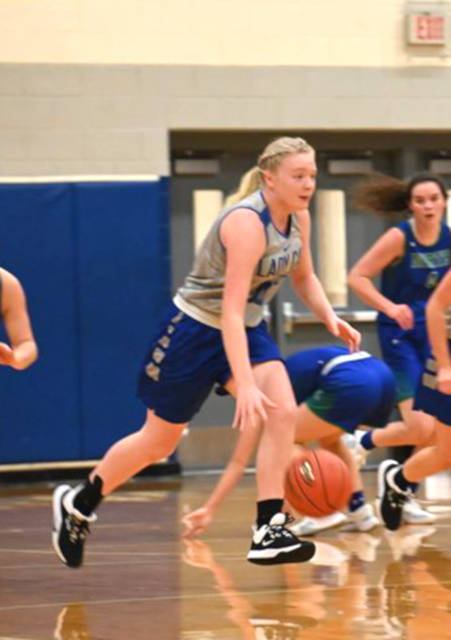 Talyah McQueen brings the ball down the floor during a preseason scrimmage against North Laurel. She finished with a game-high 18 points in Bell County’s victory over Harlan on Tuesday.

The Bell County Lady Cats used a 22-point explosion in the third quarter to cruise to a 62-31 victory over host Harlan in the first game of a girls-boys district doubleheader on Tuesday.

Talyah McQueen scored six of her team-high 18 points in the third quarter as the Lady Cats extended their lead from 24-14 at halftime to 46-27 heading into the fourth. Abigail Cornett and Ashtyn Meyers added five each.

Harlan trailed 6-0 early in the game but rallied to take a one-point lead by capitalizing on three straight Bell County turnovers. Bell led 11-9 after one quarter.

The Lady Dragons again took the lead midway through the second quarter on a three-point play by Natalee King, but Meyers hit a 3-pointer to ignite a run and slow Harlan’s momentum.

The Lady Dragons were led by Angel Wynn with nine points, Alli Thompson with seven and Ella Karst with six.

Harlan (2-3, 1-1) returns to action Thursday at home against Claiborne, Tenn., in the E.R. “Doc” Gray Classic, while the Lady Cats will travel to North Bullitt to play in the Wesbanco Bank Holiday Classic starting Friday.