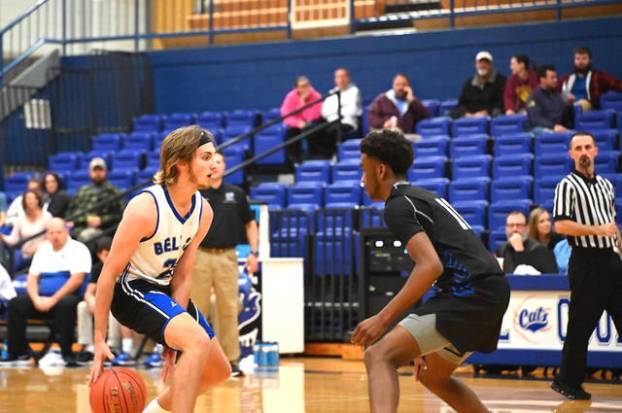 Andrew Caldwell tries to get past an OBI defender during a preseason scrimmage. He paced the Bobcats with 18 points during their victory over Harlan on Tuesday.

Bell holds off a late Harlan run for district victory

Heart, hustle and scrappy play kept the Harlan Green Dragons competitive in the nightcap of a girls-boys district doubleheader Tuesday, but a size disadvantage kept them from remaining undefeated in district play.

The Dragons battled to cut their deficit from 13 to five in the third quarter behind a strong showing by sophomore guard Jaedyn Gist, but Bell used its size advantage and fortuitous 3-pointers to hang on for a 63-52 victory.

The Bobcats led 29-21 at halftime and opened the third quarter with a 5-0 run before Jon Eldridge got Harlan on the board with a pair of free throws at the 6:29 mark. Kaleb McClendon stole a rebound from a Bell County player and converted a three-point play two minutes later to pull the Dragons within eight.

Gist’s free throws with 23 seconds remaining cut the lead to 45-40.

Andrew Caldwell and Stephen London scored eight and seven, respectively, in the final period as Bell regained the momentum.

Charles David Morton hit a pair of 3-pointers in the first quarter and Gist added five points as the Dragons stayed close, trailing 13-11 after the period.

Cameron Burnett led a balanced Bell attack in the second quarter, scoring seven as the Bobcats pushed their lead to eight.

The Dragons return to action Dec. 27 at Pensacola Beach, Fla., in the Innisfree Hotels Pensacola Beach Classic. Bell will participate in the Smoky Mountain Classic in Gatlinburg starting Thursday.

Lady Cats pull away in second half for victory over Harlan

The Bell County Lady Cats used a 22-point explosion in the third quarter to cruise to a 62-31 victory over... read more