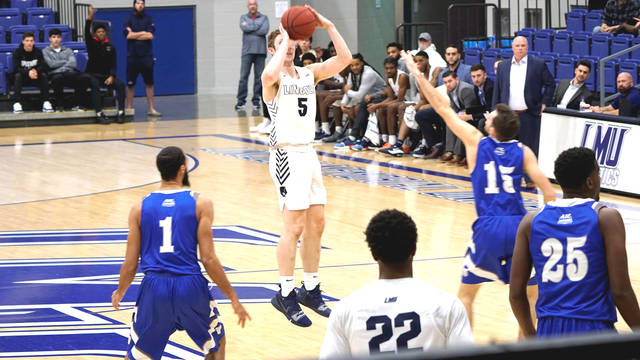 Alex Dahling pulls up from three during LMU’s game against Tennessee Wesleyan on Sunday. He finished the game with 23 points with 18 coming from three-point range.

Assisting on 33 of 45 made field goals, which ties for the fourth-most assists in a single game in program history, LMU (10-1) knocked down 19 three pointers and scored 65 second-half points.

The 122-62 win is the largest margin of victory and most points scored by the Railsplitters since Dec. 11, 2017 when LMU defeated Mars Hill 156-69 at home in league action. The Railsplitters’ 19 made threes tie for the third-most in program history, while LMU’s 45 made field goals are the most this season. For the second consecutive outing, the Railsplitters went 13-for-15 (86.7%) at the free-throw line.

Held scoreless for the first minute of action, LMU trailed 4-0 after a pair of baskets in the paint by the Bulldogs (5-6). From there, the Railsplitters wasted no time in going on an 11-0 run in under two minutes, pulling in front 11-4 on a three from sophomore guard Courvoisier McCauley after just over three minutes of play.

A Whitfield trey gave the LMU its first double-digit advantage of the contest at 17-6 just over five minutes in. Not leading by more than 12 until the 9:16 mark, the Railsplitters used a 13-4 run over the following five minutes of play to build an 18-point, 39-21 lead. After just three-and-a-half minutes of on-court action, LMU found itself up by 28 thanks to a 13-0 run that was capped by a Whitfield jumper on a fastbreak.

A layup by redshirt senior guard/forward Kamaran Calhoun on a Whitfield assist found the bottom of the net as the first-half buzzer sounded, giving the Railsplitters a comfortable 57-29 lead at the break. LMU shot 55 percent (22-of-40) in the first half and hit 11 three pointers on 24 attempts (45.8%). Whitfield scored 14 first-half points on 4-for-8 three-point shooting.

A fastbreak Dahling three pointer gave the Railsplitters their first 30-point advantage of the afternoon when he connected a little over 30 seconds into the second half. Outscoring Tennessee Wesleyan 19-6 across the first 4:45 of the second half, LMU went ahead by 41 at 76-35 on a pair of free throws by redshirt junior Shaquille Rombley.

A 14-5 run over a four-minute stretch put the Railsplitters up by 50 at 90-40 with two made free throws by sophomore guard Julius Brown at the 11:22 mark. Julius Brown would hit a jumper in the paint with 7:59 to go to give LMU a 55-point advantage at 101-46 and the Railsplitters led by as much as 65 at 118-53 with just under three minutes remaining thanks to another pair of Julius Brown foul shots. The Bulldogs closed out the game on a 6-2 run over the final two minutes of play after a layup by redshirt freshman guard MJ Armstrong gave LMU its second 65-point lead at 120-55.

The Railsplitters committed a season-low six turnovers while scoring 52 points in the paint and tallying 31 points off of 21 Tennessee Wesleyan miscues. Shooting at an impressive clip of 60.5 percent (23-of-38) in the second half, LMU made eight three pointers on 17 attempts (47.1%) and went 11-for-12 (91.7%) at the charity stripe.

Senior point guard Anthony Brown notched his sixth career double-double and first of the season with 15 points and 10 assists, his first double-digit assist game of his career. McCauley finished with 14 points on 4-for-6 three-point shooting, a season-best eight rebounds and a career-high tying six assists, while freshman guard Jeremiah Keene scored a career-high 12 points in 18 minutes off the bench.

Tennessee Wesleyan was led by starting center Jamesio Rhine who scored a team-high 16 points on 6-for-11 shooting and got eight points and a game-best nine boards from Billy Balogun. The Bulldogs’ Riley Meloncon totaled nine points on 4-for-5 shooting off the bench.

The Railsplitters wrap up their three-game homestand Wednesday night with Lenoir-Rhyne, stepping back into South Atlantic Conference play for LMU’s first midweek conference game of 2019-20. Presented by Papa John’s Pizza, tip-off from inside Tex Turner Arena is scheduled for 7:30 p.m.

It will be the second of three games in seven days for the Railsplitters, who travel to Owensboro on Sunday for a matinee tilt at Kentucky Wesleyan.