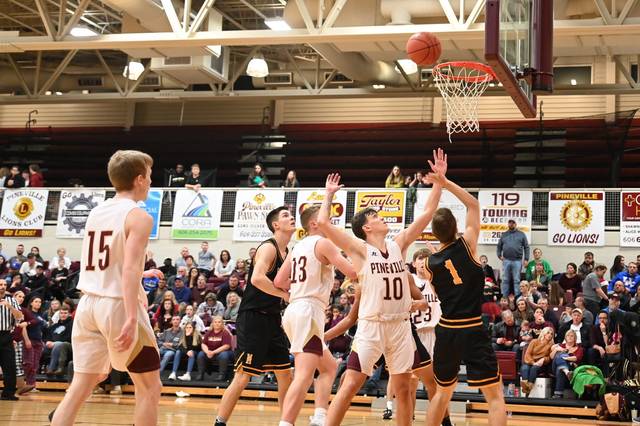 Clay Goodin fights for a rebound in a previous game against Middlesboro. He led the Mountain Lions with 17 points in their victory over Buckhorn on Monday.

Coming off of a win against the Berea Pirates in the Bill Smallwood Classic, the Pineville Mountain Lions roared to a 61-42 victory against the Buckhorn Wildcats on Monday.

“My assistant coaches came up with some good halftime adjustments against their zone defense, and our players executed them in the second half,” said Pineville coach Brad Levy. “We stepped up our defensive effort in the second half and forced turnovers, which got us out in transition.”

“Buckhorn is a good team and very well coached,” he said. “We just forced them into a bad shooting night. They won’t shoot that bad the rest of the year, so this was a real good win for our program. We have all the respect in the world for coach Hoskins and the job he does at Buckhorn.”

With the victory, Pineville improved to 4-2 on the season. They were set to take on Oneida Baptist Institute on Tuesday at home.

With the loss, the Wildcats moved to 2-3 on the season. They’re set to take on Gordon Central (Ga.) on Thursday.