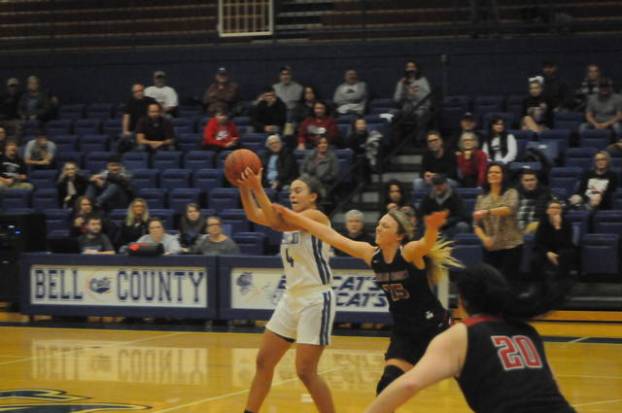 Abby Harris protects the ball from a Harlan County defender in a previous game.

“We played well early but I felt like the physicality of Johnson Central got to us as the game went on,” said Bell County coach David Teague. “We did some good things, but we have got to get better at being tougher and being more disciplined. It’s still early in the season and we’ll work on those things and try to keep getting better as the season progresses.”

The Lady Cats were led in scoring by Talyah McQueen, who had 20 points and 11 rebounds. She was followed by Ashtyn Meyers with 15 points. Abby Harris chipped in 12 points. She was followed by Sara Kidwell with five, Abigail Cornett with four, Nadine Johnson with three and Mataya Ausmus with one.

With the loss, the Lady Cats moved to 3-1 on the season. They were slated to take on the Harlan Lady Dragons on Tuesday in Harlan. Tip-off was set for 6 pm.

Pineville Middle secures All ‘A’ title

Photo submitted Coach Scott Jeffries and the Pineville Middle Mountain Lions stand and pose for their trophy after capturing the... read more