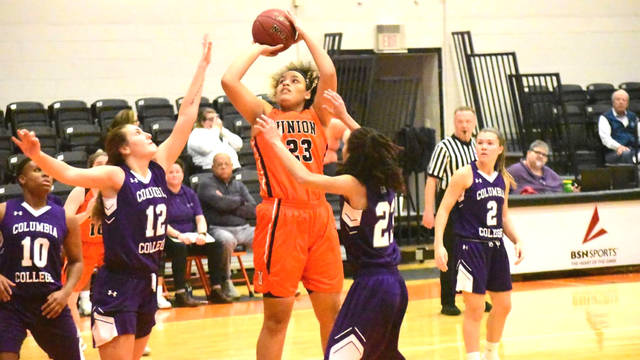 Chariss Wilson shoots over a pair of Columbia defenders during Union’s 76-52 win on Wednesday. She led the Bulldogs with 18 points.

Union got out to an early 10-point lead to end the first quarter as Haley Tye’s buckets from beyond the arc continued to fall in her favor as she ended the quarter with her first three of the contest with 2:50 remaining.

The Bulldogs pressure sustained into the second quarter as Tye hit her second shot from beyond the arc to give Union the biggest lead of the evening thus far with a 30-13 deficit with 2:46 remaining before the half. The Koalas went on a 5-0 run closing in with a 30-18 advantage for the Bulldogs to start the second half.

The third and fourth quarter Union did not let up securing a 20-plus lead throughout the remainder of the contest as the Bulldog’s biggest lead came in the fourth after Tye hit her final 3-pointer in the evening to secure a 68-38 lead. Columbia never gave up, but the damage was already done as Union captured a 76-52 conference win.

“We’ve been working a lot on defense and rebounding in practice and it definitely showed in our game today,” said Wilson. “We all had amazing energy and that helped us pull out a win today.”

Chariss Wilson led the Bulldogs offensively with 18-points, going 7-for-9 from the floor and 4-for-4 from the line.

Brooke Hammonds collected her ninth double-double with 15 points and 11 boards.

Tye finished out the double-digits going 4-for-9 from beyond the arc and 4-for-14 in the paint for 12 total points.

Union will finish out the 2019 portion of the schedule as they host Reinhardt University (Ga.) on Saturday. Tipoff is set for 2 p.m.