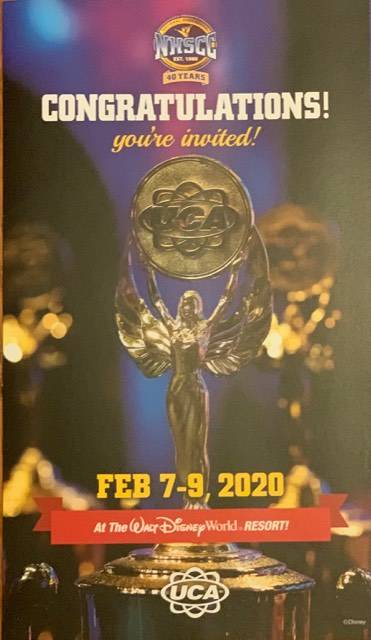 Both squads walked away with bids to the UCA National High School Cheerleading Championship in Orlando, Fla. at the Walt Disney World Resort from Feb. 7-9.

The two and a half minute squad took home the runner-up trophy in their division to earn their bid. They competed against eight other squads. The gameday competition squad, competing in their first event, finished in the sixth position in their respective division to lock down their bid.

“I have watched these girls work very hard since July,” said head coach Jennifer Lambert. “They have fought through injuries, tears, blood and now the flu — but none of this stuff stopped them this weekend in Sevierville.”

“People have said to me, ‘these girls are lucky to have coaches like you all, but I would have to say we coaches are the lucky ones. I can’t wait to see these 27 girls represent Middlesboro Middle School at Nationals.”

Middlesboro High School head cheerleading coach Carlena Carter says that the team has worked nonstop to get to where they are.

“These young ladies have been working since the summer conditioning, building strength and lots of repetition to be able to perform the skills they execute,” she said. “They practice four to five times per week in addition to cheering for football, girls basketball and boys basketball.”

She adds that their passion is what keeps them motivated moving forward. “Their passion for cheer keeps them motivated,” said Carter. “They know their goal and it’s very clear. I had the pleasure of coaching the majority of these young ladies when they were in little league, ages 7-11, and we knew then they were a special group that would make amazing things happen.”

With the success that the Lady Jackets have had in both middle school and high school over the past couple of years, Carter’s expectations for the incoming high school squad is set very high.

“Our expectations are a National Championship and white jackets,” she said. “That’s been the goal for their high school years since myself, Jennifer Lambert and Shea Yoakum began coaching at Middlesboro four years ago.

“It takes a lot of time to build into a program that can compete nationally, and that’s what we’ve been working towards since we started. On average, it takes 3-5 years for a program to build to that level, and we’re very excited for our middle school team and the coming years ahead for these young ladies.”

Carter’s daughter Alexis Marsee is an eighth-grader on the cheer team and says that nothing will hold them back from achieving their goal.

“We have had a lot of very hard practices, and we work very hard,” said Marsee. “We’ve had injuries and a few tears this season, but we keep moving forward. We don’t let that get in our way of reaching our goal.

“What keeps us motivated is, again, reaching our goal. We only had one shot this year at going to Nationals, so that really motivated us. We want to be the best we can for our team and not do anything to let them down.”