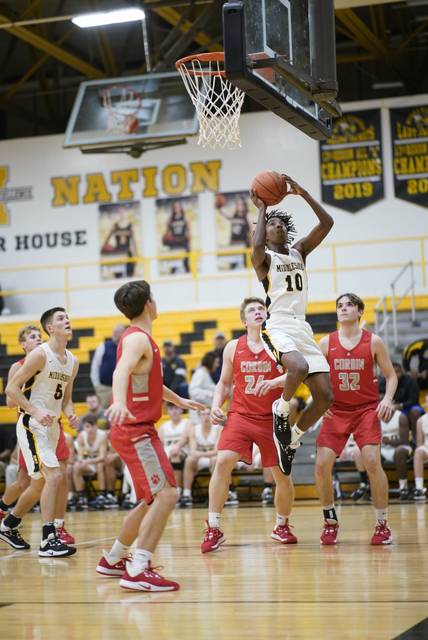 Jabari Kyle goes up in traffic for a contested two-point shot. Kyle led the Yellow Jackets with 18 points and five rebounds in a losing effort to Corbin on Tuesday.

Middlesboro falls to Corbin at home

One week after opening the season with an emphatic 30-point victory over the Thomas Walker Pioneers, the Middlesboro Yellow Jackets dropped their second straight game, falling to Corbin 55-44.

Due to inclement weather, the game was moved up and played earlier than scheduled to accommodate safer travels for all attendees.

“Corbin is always well-coached and fundamentally sound,” said Middlesboro coach Lewis Morris. “We didn’t shoot the ball very well and missed a lot of good shots. Our effort is not consistent, and that may be due to conditioning, which will improve.”

The Yellow Jackets had a tough night from the field, shooting only 35.7% for the game and 20% from beyond the arc. They only managed 17 rebounds throughout the game as well.

Through three games this season, Middlesboro is shooting just over 37% from the field, 18% from deep and 64% from the charity stripe.

With the loss, the Yellow Jackets moved to 1-2 on the season ahead of Friday’s match-up with in-county rival Pineville. The Mountain Lions are sitting at 2-1 on the season and coming off of a four-point loss to Oneida Baptist Institute.

“Pineville is playing well right now,” said Morris. “They have a lot of kids back from last year, so I expect it to be a tough game.”

The Bell County Lady Cats rolled to their third straight win of the season against the Harlan County Lady Bears... read more