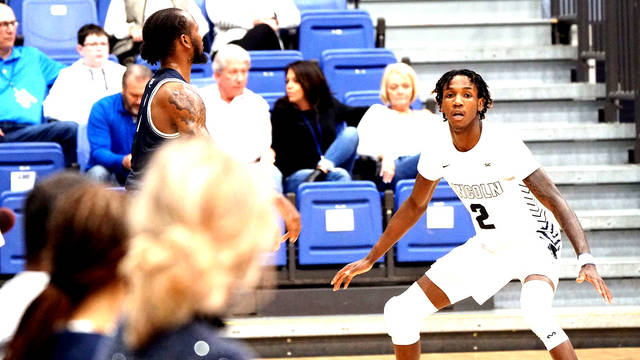 LMU’s Devin Whitfield watches the ball during a previous game. LMU jumped up to No. 7 in the NABC Top 25 rankings following a victory over nationally-ranked Queens.

KANSAS CITY, Mo. — After ending the nation’s longest road winning streak among all levels of NCAA basketball and claiming its 140th home win since 2010 over the weekend, the Lincoln Memorial University men’s basketball team has jumped up one spot to No. 7 in this week’s National Association of Basketball Coaches (NABC) Top 25.

Winning the battle of league and NCAA Division II Southeast Region leaders against the Royals, LMU remains in the top 10 of the latest D2SIDA Media Poll. The Railsplitters check in at No. 9 in the fourth regular season release of the media poll while remaining atop the D2SIDA Southeast Region Poll, which was released Monday morning. For the third consecutive week, LMU gained all possible first-place votes in the regional media poll.

There was some shake-up at the top of both national polls after defending national champion Northwest Missouri State’s Saturday loss at Central Missouri. Nova Southeastern earned eight first-place votes in the NABC Top 25 as the new No. 1, while Bellarmine sits at No. 2 in the coaches poll with four first-place nods and is the top team in the D2SIDA Media Poll with eight first-place approvals.

The Buffs of West Texas A&M, who the Railsplitters took to overtime in their season opener at the fourth annual Small College Basketball Hall of Fame Classic in Saint Joseph, Mo., are No. 3 in the NABC Top 25 with one first-place vote and second in the media poll with a trio of first-place nods. The Bearcats of Northwest Missouri State dropped to fourth in both national polls with three first-place votes in the coaches poll and one first-place vote in the D2SIDA Media Poll.

Indiana University of Pennsylvania and the University of Alabama in Huntsville are fifth and sixth, respectively, in both national polls while Daemen College is eighth. UC San Diego fell to No. 7 in the media poll and 10th in the coaches poll with Dixie State ninth in the NABC Top 25 and West Chester No. 10 in the D2SIDA Media Poll.

Fellow conference member Queens and Belmont Abbey, who are tied for second in the D2SIDA Southeast Region Poll, both appear in the national polls with the Royals ranked No. 15 in the media poll and No. 20 in the coaches poll. The Crusaders are 25th in the D2SIDA Media Poll and are receiving votes in the NABC Top 25.

On a nine-game winning streak and enjoying an eight-day break from game action for fall final exams, LMU returns to the hardwood for competition Sunday when the Railsplitters host NAIA Tennessee Wesleyan for a non-conference affair. Tip-off from Harrogate is slated for 3 p.m.