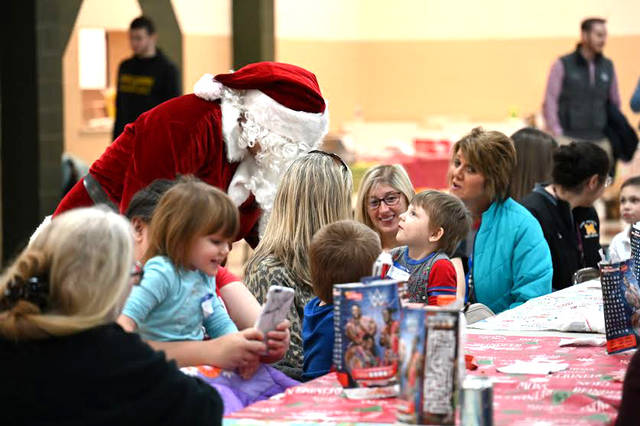 Santa Claus talks to a few kids during the Middlesboro Police Department’s Cops for Kids event on Thursday.

A tradition started back in 1986 by Middlesboro Police Officer Petey Gilbert was celebrated Thursday at the Middlesboro Civic Center. Cops for Kids brought Christmas to 25 children from Middlesboro Elementary.

“We’ve got a list that we send to the Youth Service Center at the Elementary School,” explained one of the event organizers K-9 Officer Harvey Johnson. “Every kid at the elementary school gets one. Every parent fills it out what the kid would like, their clothes sizes, and what they need. Then they send them back, and I wish all of them would turn it in but they don’t. Just 25 is all we got.”

Middlesboro Acting Police Chief Tom Busic explained that this is a year round effort by the officers with the department.

“For the last several months, officer Gilbert and officer Johnson have been going out in the community and getting donations from citizens and from local businesses,” Busic said. “Some of the businesses have donated money and others have donated food. We’ve had a lot of people that have helped us in the past that are here with us.”

Officer Gilbert started the program back in 1986, but the department took a break from 1991. They picked it back up in 1998 and have been going strong ever since.

“Back in the day, we had a lot that when we would go on calls we would see a lot of kids that didn’t have a lot,” said Gilbert. “We figured that we could do something and have something for the kids during Christmas.”

He said when the program first started the children would get $25 for clothing and $25 for toys.

“As the years went on it gradually went up, but it was great just to see the kids come out and in the past we picked our own kids,” he explained. “Now, we let the school system take care of that, and it’s a lot better now.”

“The Middlesboro School System assists in helping find the kids,” Chief Busic agreed. “They see what they need and then they get to pick one or two, and they also get clothing and things like that.”

The program formerly known as “Petey’s Kids” is something that makes officer Gilbert feel good.

“It makes me feel good and the thing about it is, this is my last time around,” he said. “So, it’s kind of hard to turn it over.”

Officer Johnson helped Gilbert last year and got used to the system.

“This year, I joined back in and did most of what I could do. It’s going to be hard to let it go,” said Gilbert. “But, I’m sure they will keep it going because it’s a good cause.”

Officer Johnson will be stepping up and taking over the program following Gilbert’s retirement.

“It is an honor and it is worth it,” Johnson explained. “You know I was born and raised here and to be able to give something back to the kids, it’s an honor.”

Johnson said one of the greatest aspects is seeing how the community came together in support of this project.

“When I went around and told the restaurants what we were doing and some individuals that donated, nobody had a problem,” he said. “Everybody was all hands in with whatever I needed and were gracious to do it. I couldn’t do it without the community, and if it weren’t for them this wouldn’t happen.”

“This has been an effort that has been going on for the last several months,” Busic explained. “It is kind of a year round thing, and the goal to get to this point right here.”

The Middlesboro High School choir group and Key Club were a part of the big day entertaining the children and taking part in helping Santa pass out presents.

Officer Gilbert explained that the donations could grow, but they haven’t worked as hard on that.

“We used to have a golf scramble and a motorcycle ride, but we got away from that,” he said. “We are going to have to start picking that back up because that raises a whole lot more money for the kids, and I’m going to make sure Harvey stays on that.”

The donations help with the entire day from the food to the gifts that the children receive.

“What the day consists of is the children will come in and get a good dinner. Then Santa Claus will see them, and they will get their presents,” Johnson explained. “Everything that is on their list we try our best to get. Anything from bicycles to whatever the kids want.”

Middlesboro Independent School Superintendent Waylon Allen also played a big part in the day and mingled with students and law enforcement throughout the celebration.

“I am delighted to help build a partnership between the Middlesboro Independent Schools and law enforcement,” Allen said. “This is a wonderful way to enforce positive relationships between local law enforcement and our families.”

“It’s hard to put into words how proud I am of everyone involved,” Busic said. “Especially the officers putting in their own time, their own efforts, and when we lose Petey, we are going to lose a lot.”

Gilbert wanted to extend his gratitude to everyone involved with the Cops for Kids day.

“I would like to thank all the sponsors for donating,” Gilbert said. “The thing is you go to them and they have no problem donating because we told them what it was for. We had nobody to turn us down, and that was a great thing.”

Officer Johnson reiterated Gilbert’s sentiments and agreed that it is all for the kids and they are thankful.