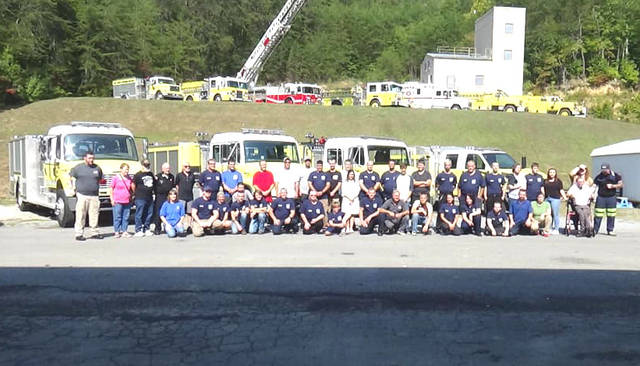 Photo courtesy of the BCVFD

Pictured is a group photo of Bell County Volunteer Fire Department members from the 40 year anniversary gathering at the headquarters in Page. Volunteer numbers for the BCVFD are currently up, a trend different the other areas in Kentucky.

A decline in volunteer firefighters has been a topic among several news outlets in Kentucky over the past couple of weeks. An editorial in The Daily Independent outlined personnel shortages among volunteer fire departments in northern Kentucky. The Bell County Volunteer Fire Department is not following the trend.

According to BCVFD President Tony Dye, numbers within the fire department as a whole are up right now. He also acknowledged the volunteer numbers also fluctuate.

Dye said many individuals think about running into burning buildings when it comes to being a member of the volunteer fire department. The BCVFD president said that isn’t always true. There are many jobs that can be done, and they are all important.

“When most people think about a firefighter, they think about running in burning houses. That’s not necessarily true because everybody can’t do everything,” said Dye. “We always tell them there’s a job for everybody. If you ain’t capable of doing something, you don’t do it. There are so many different things you can do besides going into a burning house. Not one (job) is more important than the other.

“Everything is important. Everything has to be done. Some people can run reports on scene (and) some do traffic. It takes a special breed to be able to go inside a burning building.”

Dye, who has been with the department on and off for the past 16 years, says the job is time consuming but also very rewarding. It gives you an opportunity to help the community you love.

While the numbers are currently up at the fire department, Dye said more volunteers are always needed. With nine stations scattered across Bell County, finding people to volunteer in their communities is key.

“If we don’t have anyone living in that community, we have to come from the closest place, which for most of them is around U.S. 119,” said the BCVFD president. “It’s like Colmar. We have members in Colmar, but they live in Middlesboro. If we have people in that community that is right there when something happens, (our) response would be awesome.

“The quicker you get there, the better you can do. If you get on scene quick enough, you might save a house. A lot of times, your response time makes a difference.”

For those interested in becoming a member of the Bell County Volunteer Fire Department, you can fill out an application at the headquarters in Page. You attend three meetings, which are on Thursday nights at 7 p.m., and the members will vote on you. If they approve, you become a firefighter.

Everything you need to be a member will be furnished, according to Dye. Background checks are performed on those who apply for membership.