Union men’s basketball unable to rally for the victory 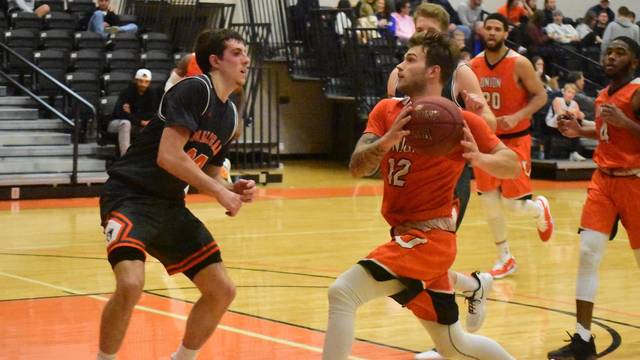 Austin Cummins drives to the basket during Union’s loss on Saturday. He finished the night with six points, two steals and an assist in 22 minutes off the bench.

Despite scoring the game’s opening points, Union spent the entire game playing catchup. Richard Brown gave the Bulldogs the early 2-0 lead, but the Rams countered with an 8-0 and never trailed again. Union got within 26-23 following a 5-0 spurt, but CIU took a 33-27 lead into the half.

Early in the second half, Union ripped off a 10-0 run to tie the score at 39-all with 14:14 remaining. Brown netted seven points during the stretch. Yet, Union never managed to grab the lead again. The Bulldogs cut the margin to one on two occasions with the final one coming with 6:23 mark after Jakobe Wharton sank a pair of free throws. However, CIU went on an 11-1 run to open up a 67-57 cushion and never looked back.

Brown missed getting a double-double, finishing with a team-high 20 points and nine rebounds. He shot 7-of-13 from the field and blocked four shots.

CIU won the battle on the boards, outrebounding Union 37-36.

This marks the fourth time this season Brown scored 20 or more points in a game. Only Carson has more with five.

Union returns home to host Truett McConnell University (Ga.) on Wednesday for another conference battle. Tipoff is set for 7:30 p.m.