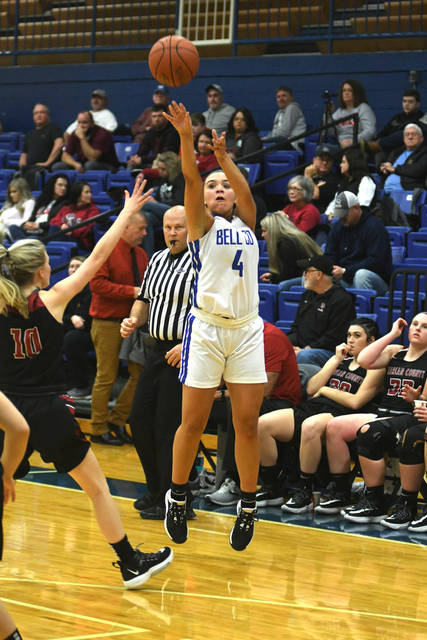 The Bell County Lady Cats rolled to their third straight win of the season against the Harlan County Lady Bears on a snow covered Log Mountain Tuesday night.

In a back-and-forth game that was tightly contested, Bell County was able to stretch its lead to nine points before the Lady Bears fought back to within two points. Big free throws and limited mistakes down the stretch allowed the Lady Cats to hold off Harlan County and post a 54-46 victory.

Talyah McQueen led the Lady Cats with 16 points. She was followed by Ashtyn Meyers with nine, Abby Harris with eight, Sara Kidwell with eight, Abigail Cornett with seven, Nadine Johnson with three, Lenia Miracle with two and Mataya Ausmus with one.

Harlan County began the game in a full court press, causing the Bell County offense to get off to a slow start. Abby Harris got things started on the scoreboard with two free throws, giving Bell County a 2-0 lead to start the game.

Jaylin Smith connected on a layup on the next possession to tie the game. After a bucket from Talyah McQueen gave the Lady Cats a 4-2 lead, Kelly Beth Hoskins sank a 3-pointer to give Harlan County its first lead of the game at 5-4.

Both offenses struggled against the press throughout the remainder of the quarter. Each team accumulated multiple turnovers. However, both teams managed to end the quarter knotted up at 17-17.

The Lady Bears began the second quarter with two free throws and a 15-foot jumper from Morgan Blakely to take a four-point lead at 21-17.

After forcing the Lady Cats into two more turnovers, Harlan County extended its lead to 24-17, their largest of the game, with a 3-pointer from Jaylin Preston.

Harris ended the Lady Bears’ run with two free throws. After a couple of empty possessions for Harlan County on offense, the Lady Cats started to chip away at the lead with a two-point basket from Sara Kidwell, bringing the score to 24-21.

Each team followed with two successive turnovers apiece. With the score sitting at 24-21, Abigail Cornett connected on a pair of free throws, leaving Harlan County with only a one-point lead, 24-23. Kidwell connected on one more free throw with just over two minutes remaining before the half to tie the game at 24.

Nadine Johnson came up with a defensive rebound, which she took coast-to-coast for two points with just under 30 seconds left in the quarter to give Bell County a 26-24 lead at the break.

Coming out from halftime, the Lady Bears wasted no time in tying the game up. Just 20 seconds into the period, Blakely connected on two free throws to tie the game at 26.

After back-to-back turnovers, Bell County regained the lead when McQueen scored from the post position. Hoskins answered with a transition 3-pointer to give Harlan County the lead back at 29-28 with just over six minutes remaining in the third.

The Lady Cats went on a 6-0 run with a free throw from McQueen, a lay-up from Kidwell and a 3-pointer from Ashtyn Meyers to regain and increase their lead to 34-29 with 5:10 remaining.

Each team’s offense began to increase tempo with Bell County scoring four more points during the period. Harlan County scoring eight more before the period ended, allowing the Lady Cats to hold a slim 38-37 lead heading into the final frame.

The Lady Cats began the fourth quarter on a 8-0 run, allowing them to extend their lead to 46-37 after four free throws from McQueen, a 3-pointer from Cornett and a free throw from Johnson.

The Lady Bears put together a run of their own, going 7-0 with a 3-pointer from Hoskins, two free throws from Blakely and a layup from Kassydee Owens, chipping away at the Bell County lead and drawing the score to 46-44 with 4:19 remaining.

Harlan County would only manage two more points throughout the period on a pair of free throws from Blakely. The Lady Cats managed eight more points to secure the eight-point victory.