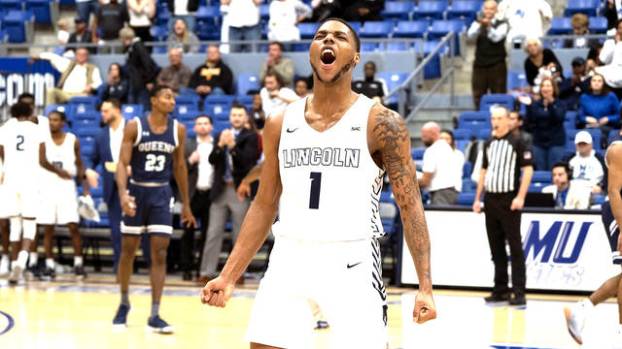 Courvoisier McCauley celebrates during No. 8 LMU’s win over No. 12 Queens on Saturday. He finished the game with 26 points with 12 coming from three-point range in 38 minutes of action.

HARROGATE, Tenn. — Snapping a three-game slide versus Queens University of Charlotte, the eighth-ranked Lincoln Memorial University men’s basketball team used a dominant first half and shot 51 percent from the field to upend the 12th-ranked Royals Saturday inside B. Frank “Tex” Turner Arena, 73-64.

In a battle between the top two teams in the South Atlantic Conference and NCAA Division II Southeast Region, the Railsplitters (9-1, 4-0) earned their ninth-straight win to remain unbeaten in league play.

LMU held Queens (7-2, 2-1 SAC) to just 34.8 percent shooting for the 40 minutes of action and owned an 18-point, 39-21 lead at halftime after knocking down six first-half 3-pointers and limiting the visiting Royals to only eight field goals.

Getting a game-high 26 points on 10-for-15 shooting from sophomore guard Courvoisier McCauley, the Railsplitters led by as many as 20 in the first half and were able to withstand a 24-13 Queens run over the first 12:06 of the second half.

Despite being outscored 43-34 in the second 20 minutes of play, LMU used a 14-7 run over a four and a half minute stretch late to come away victorious in the top-15 matchup. The Railsplitters overcame a minus-13 deficit on the offensive glass and a minus-five rebounding margin, scoring 18 fastbreak points and claiming 16 points off of 11 steals.

The Royals were relentless on the offensive boards and got excellent production from their reserves, tallying 12 second-chance points on 16 offensive rebounds and outscoring LMU 32-17 off the bench. However, key plays late and a strong defensive first half willed the Railsplitters past Queens.

LMU went 13-for-15 (86.7%) at the foul line and limited the Royals, who entered the game ranked fifth nationally in free-throw attempts, to only 10 attempts at the charity stripe. Able to withstand 21 turnovers, the Railsplitters led for all but the opening 1:42 of the game.

A Queens free throw and a jumper by guard Daniel Carr gave the Royals their only lead of the day at 3-0 after a minute of play, but LMU went on a 15-1 run over the following six minutes thanks to McCauley and redshirt sophomore guard Cameron Henry combining for the Railsplitters’ first 13 points. LMU would increase its lead to 16 at 27-11 with 7:49 showing in the first half on a three pointer from sophomore guard Julius Brown. A trey by redshirt junior guard Devin Whitfield capped a 22-10 Railsplitter run and gave LMU its largest lead of the day at 20 (39-19) with 2:23 remaining in the half.

A slow offensive start by both teams in the second half resulted in a combined two made baskets across the opening three minutes of play. After a three ball by McCauley made it a 19-point game at 44-25, the Royals went on a 12-3 run over the following five minutes of action to pull within 10 at 47-37 with 11:46 to go. Another trey from McCauley put LMU in front by 13 but Queens would work the lead down to seven at 52-45 with just under eight minutes remaining.

A jumper in the paint by McCauley ignited the Railsplitters’ game-clinching 14-7 run over a 4:14 span, giving LMU a 14-point advantage at 68-54 with only 3:06 left. A pair of Royal free throws by Jachai Taylor trimmed the lead to nine just under two minutes to go and a jumper from Queens’ Jermaine Patterson made it a seven-point game with 51 seconds on the clock, but the Railsplitters hit three of four free throws and got a layup from redshirt senior guard/forward Kamaran Calhoun to seal the victory.

McCauley made four threes and added six rebounds and four assists to his 26-point performance, while Henry and Brown both finished with 12 points and a career-high four steals. Whitfield tallied a season-best seven rebounds and six assists to go along with seven points and redshirt senior forward Rhondi Hackett scored seven with a season-high four blocks and career-high tying four assists.

The Royals were led by Patterson’s 12 points and three assists as guard Daniel Carr and Taylor each posted 11 points. Carr also had six rebounds and a trio of assists with forward Gavin Rains scoring six points and totaling a game-high 13 rebounds, including eight on the offensive glass. Queens’ Junathean Cunningham notched nine points off the bench.

The Railsplitters will have an eight-day break from game action before continuing their three-game homestand on Dec. 15 with a non-conference affair against Tennessee Wesleyan. Tip-off from inside Tex Turner Arena is slated for 3 p.m. On Dec. 18, LMU wraps up its homestand and steps back into SAC play when it hosts Lenoir-Rhyne at 7:30 p.m. in Harrogate.