Mountain Lions down Pioneers to extend streak to 2 games 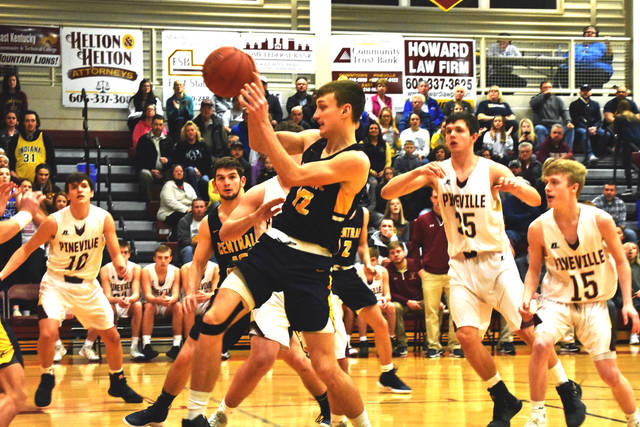 The Pineville Mountain Lions are off to a great start under first-year head coach Brad Levy. Just two days after defeating Red Bird in the first game of the season, the Lions took care of business against Thomas Walker at home on Thursday night, downing the Pioneers 86-72.

Pineville had three players in double-digits for the game: Keean Fuson, Clay Goodin and Sean Phipps. Fuson led the Lions with 20 points. Goodin added 16 and six rebounds. Phipps had 14 points and 10 rebounds to earn a double-double.

In the first quarter, each team came out firing. Pineville had seven different players aiding the effort in the first quarter led by K. Fuson, who totaled four points in the opening stanza. Thomas Walker guard Caleb Yeary wouldn’t allow his team to go down without a fight. He and teammate Logan Ely netted eight points each for the Pioneers in the first period. Yeary finished with 36 points to lead all scorers.

“Hats off to Yeary,” said Pineville coach Brad Levy. “He was a load to handle. He got to the basket, hit tough shots and set up his teammates well. We struggled defensively tonight, but I’m proud with how we’ve played offensively through the first two games. We are currently averaging 82 points a contest.”

The second period was dictated by Pineville. Yeary seemed to struggle on offense in the second quarter, scoring only four points. With the Pioneers’ best player struggling mightily on offense, the Lions took advantage and outscored Thomas Walker 27-10 in the period, allowing them to gain and hold a 44-29 lead at the half.

As play resumed in the third, Yeary began to heat back up for the Pioneers. He totaled 12 points in the period, just five points less than the Mountain Lions’ squad as a whole. Thomas Walker outscored Pineville 23-17 in the period to chip into the lead and bring the score to 61-52 heading into the last quarter of the game.

Yeary continued to lead the Pioneers. He has 14 points in the final period, but it wasn’t enough. Pineville outscored Thomas Walker 25-20 in the final frame of the game, allowing them to post a 14-point victory and their second straight win to start the season.

“We put an emphasis on skill development and executing offensively in the preseason, and it’s paying off so far,” said Levy. “We will have a tough match-up Tuesday against OBI in the All A play-in game. We will get back to work and hope to have these kids prepared and ready to go Tuesday night.”