Lady Lions defeat the Pioneers for first win of year 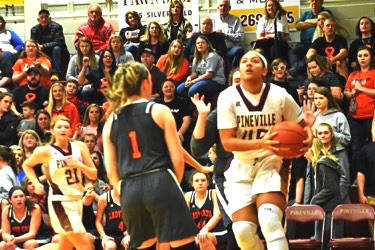 Two days after falling to the Corbin Lady Redhounds in their season opener, the Pineville Lady Lions etched their first win of the season in a 54-31 decision at home against the Thomas Walker Lady Pioneers.

The Lady Lions were led by Raigan King with 21 points. She was followed by Whitney Caldwell with 14. Brittany Davis added nine, Virginia Hall had six and Summer Partin added four.

“We played very well as a team after the first quarter,” said Pineville coach Jamie Mills. “Our defense was excellent and our bench contributed a lot. We cut our turnovers down from what they were in the first game but still need to work on that. I’m very pleased with the effort. This is a fun team to watch when they play this way.”

The first quarter began sluggish for Pineville, as they were outscored 9-8 in the period. Caldwell had two 3-pointers made in the first frame and Partin added a basket as well.

The second quarter was much different. King began to take over the game. She attempted nine free throws in the period and connected on eight of those. Davis added a pair of three-point baskets in the second quarter as well. Hall and Partin added one bucket each as the Lady Lions built a 28-14 lead at the half.

Pineville’s offense came out a little cold in the third quarter, but they were able to find some points from the charity stripe. Caldwell connected on 3-of-4 free throws, and King connected on 2-of-3 free throws in the period and each added a field goal. Hall added two points in the period.

After having outscored the Lady Pioneers again in the third quarter, the Lady Lions held a 39-24 advantage heading into the final frame of the game. King connected on 5-of-5 free throws in the period to help solidify the Pineville victory. Caldwell and Davis added a three-point basket each and Hall added one bucket.

With the victory, the Lady Lions improved to 1-1 on the season. They will take on the Red Bird Lady Cardinals on Dec. 9 at home. Tip-off is slated for 7:30 p.m.

Railsplitters rise in both national polls