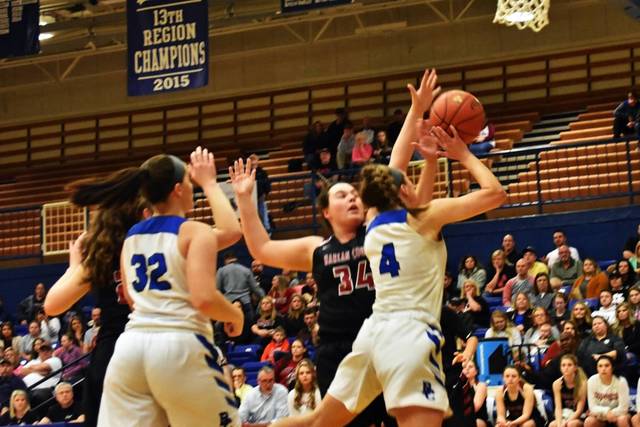 Abby Harris goes up for two in a game from last season. Bell County defeated Clay County on Thursday night.

With four players scoring in double-digits and two finishing with double-doubles, the Bell County Lady Cats were able to hold off the Clay County Lady Tigers with a big performance in the fourth quarter to secure a six-point season-opening victory, 55-49.

Bell County was led in scoring by Talyah McQueen with 17 points and 14 rebounds. Abigail Cornett and Abby Harris followed closely with 12 points each. Harris also led the team in rebounding with 15 to cap off a double-double of her own. Ashtyn Meyers added 10 points. Sara Kidwell added four points.

“It was a good win for our basketball team,” said Bell County coach David Teague. “The girls played hard and we battled. It wasn’t always the prettiest at times, but the girls executed and made plays when we needed them.”

“It was a good way to open the season for us,” he said. “I was proud of our effort, and we can take a lot of things from this game and build on them for the rest of the season.”

Clay County was led by Kaylee Mathis, who finished with a game-high 20 points. Jaylen Combs was the only other Lady Tiger to finish in double figures with 11 points. Taylor Asher and Allie Phillips led the team with six rebounds apiece.

With the victory, The Lady Cats open the season 1-0. They are slated to play Lincoln County at South Laurel High School on Saturday at 1 p.m. in the 12th/13th Region Challenge.

Mountain Lions down Pioneers to extend streak to 2…