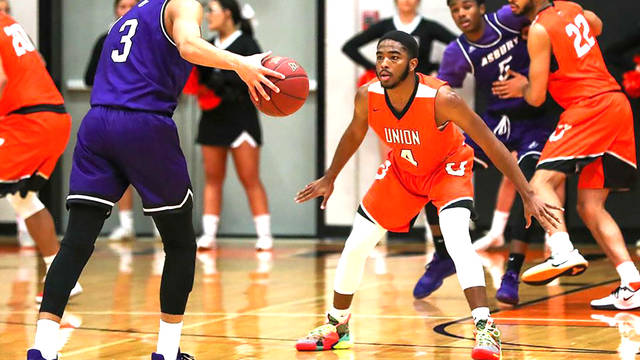 Jakobe Wharton guards an Asbury player earlier in the season. He finished with eight points, five rebounds and five assists during Union’s 81-76 victory over Robert Morris on Sunday.

The win moves the Bulldogs to 7-4 overall, while the Eagles fall to 6-4 on the year.

The NAIA Division II Showcase was held at the MeadowView Marriott Convention & Resort in Kingsport, Tenn.

Robert Morris jumped out to an early 4-0 start until Isiah Knight hit Union’s only three-point shot to close the gap 4-3 at the 18:58 mark. It was back-and-forth until Richard Brown hit back-to-back baskets to give the Bulldogs an 11-8 lead.

Union kept the pressure on Robert Morris earning an 18-point lead, the biggest of the contest forcing it to a 42-32 battle back for the Eagles to start out the second half. With the Bulldogs sitting comfortably to start the final half, Robert Morris took advantage of tying the game at 43-43 with 16:06 remaining. The Eagles were able to see their final lead with a 46-44 mark during the 14th minute.

The Eagles’ Joshua Robert tied the game for the final time making it 54-54 with under 10 minutes to go. Union pulled ahead making it a 10-point deficit after Ronnie Carson hit a field goal with 3:04 remaining. Jakobe Wharton was fouled and with 2-of-2 from the line to continue Union’s success and finish the game with an 81-76 win.

Brown and Nick Marshall led the Bulldogs each posting double-doubles, as Brown earned 20 points with 10 boards and Marshall collected only his second double-double with 12 points and 11 rebounds.

Along with Brown and Marshall, Carson scored in double-double digits with 19-points.

Union outrebounded Robert Morris 51-44 with Marshall hauling the game-high of 11.

Union will stay on the road as they travel to Columbia, S.C. to face Columbia International University (S.C.) for an Appalachian Athletic Conference (AAC) matchup. Tipoff is set for 4 p.m. on Saturday.