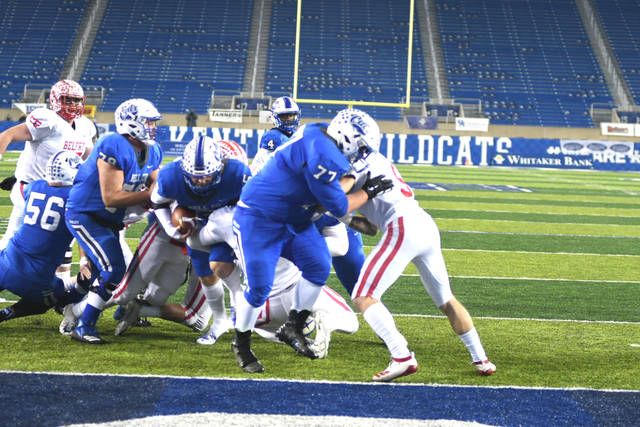 The clock struck midnight on Bell County’s Cinderella season as they fell short of a perfect year by one game. The Belfry Pirates defeated the Bobcats 30-20 in the KHSAA Class 3A state championship game at Kroger Field in Lexington on Friday night.

The Bobcats experienced something that they hadn’t experienced all season in this game. On the night, the Bobcats were outrushed 379-141. They were outgained on offense as a whole 379-291. The Pirates only threw one pass all night, which fell incomplete.

Belfry is the only team to hold a lead on the Bobcats after their initial possession all season long.

Belfry struck first with a 30-yard touchdown run from Isaac Dixon with 3:12 remaining in the first to give Belfry a 7-0 lead after a successful PAT from Grayson Cook.

Bell County answered on their ensuing possession with a 1-yard rushing touchdown from London Stephney with 10:11 remaining in the second quarter. Jason Jones missed the PAT, allowing Belfry to hold on to a 7-6 lead.

On their next drive, Belfry wasted no time hitting pay dirty again on the legs of Dixon, this time from 69-yards out with 9:14 remaining before the half to allow Belfry to extend their lead to 14-6 after a successful Cook PAT.

On their following possession, Bell County chewed up 4:46 of the game clock and answered with a 5-yard touchdown run from Hunter Bailey. After an unsuccessful 2-point conversion, Belfry maintained a 14-12 lead with 4:19 remaining before the half.

With Belfry starting the second half on offense, they wanted to extend their lead before the half. They marched down field in 3:30 and worked their way inside the 10-yard line. Dixon carried the ball down to the 1-yard line, but the Pirates were called for holding and the ball was backed up to the 20-yard line.

After a couple of unsuccessful attempts to the end zone, Belfry settled for a 24-yard field goal from Cook, to extend their lead to 17-12 at the half.

As the Pirates regained offensive possession to start the second half, neither team was able to work their way into the end zone.

With 9:59 remaining in the game, Dixon scored for the Pirates on an 8-yard touchdown run, bringing the score to 23-12 after an unsuccessful PAT.

Belfry wasn’t done scoring after that. With 4:31 remaining in the game, Ben Bentley punched in the final Pirate touchdown of the night and increased their lead to 30-12 after a successful PAT from Cook.

Belfry ran the ball to chew up the last few precious seconds of game time as emotion began to overwhelm the Bell County sideline. As the clock struck zero, the teams met on the field. A clear respect was evident between the two teams all the way from the coaches and players to the cheerleaders and fans.

The Bobcats finish the season with a 14-1 record, including the state’s highest rated offense, second highest rated defense and as the state runner-up.

This was coach Dudley Hilton’s first loss in a state title game. Prior to this season, he held a record of 3-0 in title clinching games.