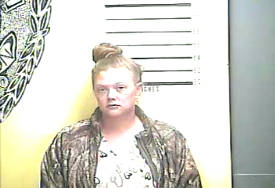 A Middlesboro woman was arrested Wednesday after police say she allegedly choked and stabbed another woman with an ink pen. Bethany M. Evans, 33, was arrested by deputies with the Bell County Sheriff’s Office and charged with first-degree strangulation and second-degree assault (domestic violence).

According to the citation, Evans used her “bare hands” to apply pressure on the throat or neck of the victim resulting in severe bruising and causing the victim to lose consciousness. She also allegedly stabbed the victim repeatedly in the upper thighs with an ink pen, resulting in puncture wounds.

The citation states the victim said she “feared for her life.”

Evans is being held at the Bell County Detention Center without bond. Deputy Edward Dray is the investigating officer on the case.

Others recently arrested on felony charges include:

• Jason Dye, 35, of Pineville, was arrested on Wednesday by officers with the Middlesboro Police Department and charged with first-degree trafficking a controlled substance (heroin), possession of drug paraphernalia, improper parking violations and no operator’s/moped license;