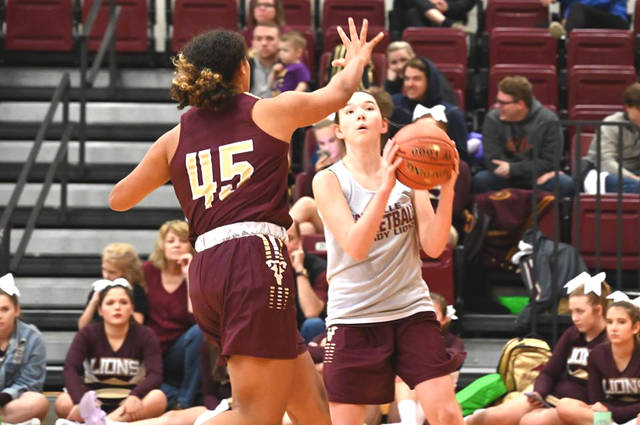 Summer Partin looks to shoot during “Meet the Lions” in November. She finished Pineville’s season-opener against Corbin with a team-high 17 points and 13 rebounds.

After starting out on par with Corbin, Pineville found themselves in a hole they couldn’t dig their way out of on Tuesday as they lost their season-opening game to the Lady Redhounds 58-44.

For Corbin, it was Marissa Scott who got in a rhythm early en route to a 26-point outing. She finished 4-or-5 from three-point range. Shelby Stewart scored 13 points for the Lady Redhounds, and Bailey Stewart ended the game with 12.

The Lady Lions battled to a 9-9 draw in the first quarter before Corbin began taking control of the game. Scott’s 12 points in the second quarter helped the Lady Redhounds take a 24-18 lead into the half.

After slowing down Scott in the third quarter, new problems developed for Pineville in the form of Shelby and Bailey Stewart. The duo combined for 12 points in the quarter to help Corbin extend their lead to 42-29 at the end of the third.

The Lady Redhounds outscored the Lady Lions 16-15 in the final frame to secure the 14-point victory.