Braxton Caldwell signs with University of the Cumberlands 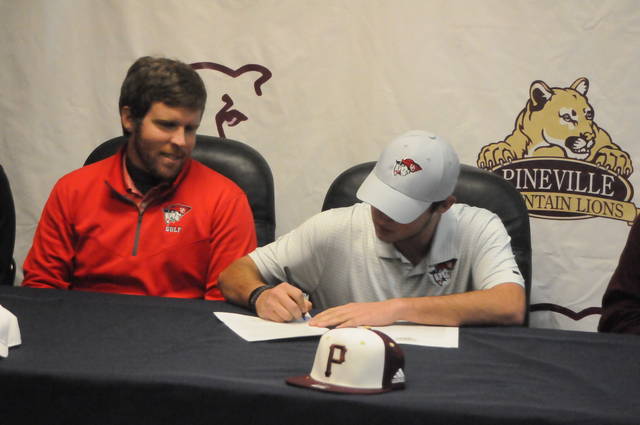 Braxton Caldwell signs his letter of intent to UC with coach Aaron Watkins on Thursday afternoon at Pineville High School.

Pineville senior golfer Braxton Caldwell officially became a UC Patriot when he inked his signature on his letter of intent Thursday afternoon at Pineville High School.

Caldwell, who won the Mountain Laurel golf tournament, the 13th Region tournament and played in the KHSAA state championship tournament, was surrounded by his family, friends and coaches as he etched his signature to the University of the Cumberlands.

Patriot’s head coach Aaron Watkins says that he feels like he is getting a golfer who has tremendous upside. “I feel like we are getting a small town guy who has a big heart and all the potential in the world,” he said. “I feel like he didn’t get the notoriety that he deserved. I think he is just as talented as any of those kids that go to bigger schools — I’m very excited.”

Watkins adds that UC will give Caldwell every opportunity in the world to be successful and flourish. “I think we already have and are putting in the facilities on campus to be competitive at every level, not just this level. I feel like we can offer him as much if not more than anyone else in the country. We have guys that have been where he is and been where he wants to be and know how to help him achieve that.”

Caldwell’s parents, Ronnie and Shannon, say that this is as much of a dream come true for them as it is for their son.

“It’s bittersweet because you watch them work so hard to achieve their dreams. When they do, the joy they feel — you feel as a parent,” said Ronnie. “On the other side of that, you start missing when they were little. I’m already missing the high school stuff. We’re very proud of him. He has the opportunity to not only further his golf career but his education as well, and you just can’t ask for more than that. We are very proud.”

“It was hard watching him on that 18th hole in that last tournament,” said Shannon. “UC is a great program — a top-notch program. We are very happy with his choice to go to school there. I’m excited for him, but it’s going to be hard not having him coming home every evening and stuff like that. But, we are super proud of all that he has accomplished. We are blessed as a family.”

Caldwell says that he has worked diligently to get to where he is and is happy to see all of his hard work paying off.

“Every kid who plays a sport dreams of playing at the next level,” he said. “It feels great that it has been made a reality for me. It’s a very good feeling to see all of my hard work paying off. I’m going to continue working hard and hopefully big things come in the future.”

After a good summer of tournament golf, Caldwell says he is proud of his hometown and will represent Pineville with pride wherever he goes.

“I’m proud of Pineville,” he said. “Everyone is always so supportive of everyone else. It’s like a big family. They are always doing whatever they can to help you become the person you want to become. I am proud to be a Mountain Lion and always will be.”