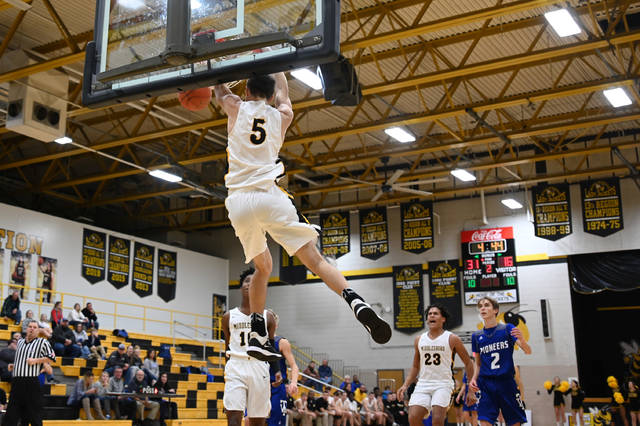 Trey Brock throws down an emphatic dunk against the Pioneers on Tuesday. Brock led all scorers with 28 points.

The Middlesboro Yellow Jackets notched their first win of the year in their season tip-off game against the Thomas Walker Pioneers from Ewing, Va. Middlesboro was in control from start to finish. With athleticism, length and speed, the Yellow Jackets ran circles around the Pioneers all night, allowing them to post a 78-48 victory to start the 2019-20 season.

“I’m glad we got the win, but we’ve got a long way to go,” said Middlesboro coach Lewis Morris. “We’re just not playing good sound basketball yet. It looked like the first of the year. Defensively, we didn’t do a few things. I didn’t see a lot of boxing out. That’s stuff that we are going to have to quickly improve on or we will be in some trouble.”

Trey Brock paced the Jackets offensively scoring a game-high 28 points. Jabari Kyle followed after tallying 17 points of his own. TJ Patterson also finished the game in double digits with 11 points.

Middlesboro jumped out to a quick lead that they would never surrender. Each team traded buckets for a couple of possessions to start the game before the Yellow Jackets began to pull away.

The 7-5 lead held by Middlesboro in the opening minutes of the game would be the closest Thomas Walker would come to gaining a lead. By the end of the first quarter, the Yellow Jackets had already built a 10-point lead at 21-11.

Things didn’t get much better for the Pioneers as they game went on. The second quarter was Middlesboro’s best as they outscored Thomas Walker 23-15 to close the first half, allowing them to hold a 44-26 lead.

The Yellow Jackets opened the third quarter on a 10-0 run, extending their lead to 54-26. They would hold the 28-point lead heading into the final frame of the game.

Both teams played a lot of their players off the bench in the final period of the game with Middlesboro holding a commanding lead. The Yellow Jackets went on to outscore the Pioneers 16-14 in the final period and secure a 30-point victory in their season opener.

“We need to get in better shape,” said Morris. “It’s very early in the season, and we have time to do that. We’ve just got to get our football guys back in basketball shape. I’m looking for maximum effort. I saw a lot of great effort tonight, but I also saw fatigue take over in some situations. Once you get tired, it makes it hard to fight through that.”

“We are just going to work on getting better every day,” he said. “We’ve got to figure out our roles on the team still. We did some good things at times and some sloppy things at times. We will find out more about our team coming up early in the season. We have some tough games coming up, and we are going to be ready.”

The Yellow Jackets will square off against the Harlan Green Dragons on Friday in Harlan.