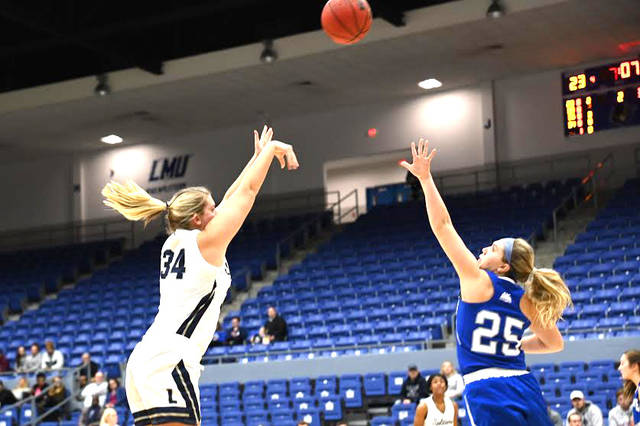 LMU junior forward Maggie Jachimczuk (34) shoots a jumper during Tuesday’s 68-54 win over Tennessee Wesleyan. She tied her career high as she led all scorers with 17 points.

HARROGATE, Tenn. — LMU junior forward Maggie Jachimczuk tied her career high as she led all scorers with 17 points to lead LMU (3-3) to a 68-54 win over Tennessee Wesleyan Tuesday in Tex Turner Arena.

• LMU went inside early, shooting out to a 13-5 lead over the first eight and a half minutes.

• Wesleyan came out on fire in the third period and rode the back of 60 percent shooting from the field to spark a pair of runs that cut the LMU lead to 47-40 with 2:20 remaining in the quarter.

• The Lady Railsplitter defense would then stiffen in the fourth quarter as they held TWU to only 20 percent shooting and two made field goals for the final stanza.

• Jachimczuk tied her career high of 17 points. She also had 17 against UVa-Wise last season. She went 6-for-11 from the field, 2-for-3 from three-point range and 3-for-4 from the free-throw line.

• Semajia Ogburn led all players on the boards with eight, while Taylor Cotner-Brabson came off the bench to pull down seven rebounds.

• The Lady Railsplitters won the battle of the boards 44-36.

• LMU outscored the Bulldogs 18-4 on second-chance points, and their bench had 32 points in the paint to 14 by Tennessee Wesleyan.

The Lady Railsplitters will continue their three-game home stand as they step back into South Atlantic Conference play when they host Queens on Saturday at 2 p.m.