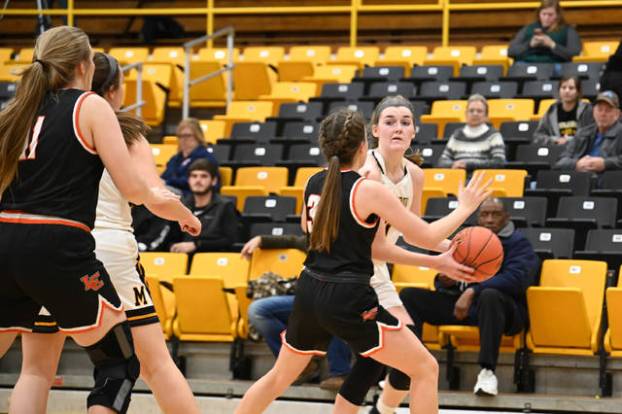 Kailey Owens looks to dish the ball inside in the first half of the game against Lynn Camp Monday night. Owens led Middlesboro with 20 points.

The Middlesboro Lady Jackets got their season started off with a victory over Lynn Camp at home on Monday, 57-52.

The Lady Jackets led the whole game, but the Lady Cats battled back to within a point with under 20 seconds left. Continually turning Lynn Camp over and some big free throws down the stretch allowed Middlesboro to hold on and secure a five-point victory.

“Lynn Camp gets after it,” said Middlesboro coach Scott Overbay. “I know most of those folks really well. They work hard, and coach Clarke has done a great job with them, especially with what all they lost last year. We played against and won against a good basketball team.

“I thought we did a good job of moving the ball against the zone in the first half, but we seemed to take our foot off the gas in the second half. It comes down to experience. We need to learn how to play with a lead better and take care of the ball better down the stretch in a tight game.”

“I’m proud of our team tonight,” he added. “This game is going to do wonderfully for our confidence. I thought Emrey played a heck of a game. Kirsten played a great game for us defensively and shot the ball well in the second half. Kailey did a great job on the glass for us and in the paint. Grace is doing a great job of stepping into her role as a point guard. She hasn’t played the position since middle school. I’m really proud of every single one of them. They gave great effort.”

Middlesboro started the game off on a 6-0 run with Kailey Owens and Gracie Gent netting buckets early for the Lady Jackets. It wasn’t until with 3:40 remaining in the first that the Lady Cats were able to put points on the board on a 3-pointer from Abby Mabe.

Each team traded buckets for the rest of the period, which ended in Middlesboro holding a 14-10 advantage at the end of the first quarter.

With half of their points coming from the free-throw stripe in the second quarter, Lynn Camp was able to slightly chip away at the Middlesboro lead by outscoring them 14-13 in the period. The Lady Jackets held a 27-24 advantage at the half.

Although the Lady Jackets had built an 11-point lead heading into the final period, the Lady Cats would not go away. Outscoring Middlesboro 18-12 in the period, Lynn Camp battled back to within one point at 53-52 with under 20 seconds remaining after two big free throws from Alissa Crumpler.

Owens then sank two free throws giving Middlesboro a 55-52 lead before she added one more bucket as time expired for a five-point margin of victory.

With the victory, the Lady Jackets improved to 1-0 on the season. Lynn Camp moved to 0-1. The Lady Jackets were slated to take on Knox Central Tuesday on the road. Lynn Camp traveled to Williamsburg on Tuesday.

Pineville, Middlesboro and Bell County all have athletes that have represented Bell County well this year on the gridiron. Each... read more