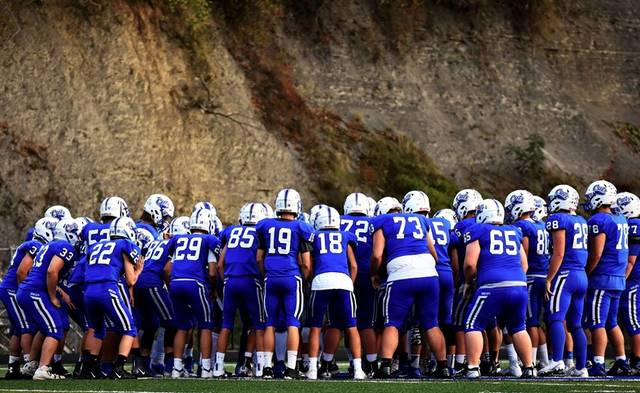 The Bobcats huddle before a game earlier this season. They will take on the Belfry Pirates this week in Lexington for the Class 3A state championship.

There’s only one game left on the year, and it’s the one that everyone in the state has been playing toward all season — the state title game. This game will feature the top two all-time coaching win leaders in the state of Kentucky with Dudley Hilton in second place with 393 wins and Belfry coach Phillip Haywood in the top spot with 448.

The Pirates have fought their way to a 10-3 record this season, outscoring their opposition 472-178. They are a very run-heavy team. They have two ball carriers over 1,000 yards this season and a third who has just under 1,000.

Peyton Hensley leads the team with 1,371 yards on 167 carries for 18 touchdowns, ranking 16th in the state — one spot ahead of Bell County’s Brandon Baker. He is averaging just over 100 yards per game. Ben Bentley ranks 24th in rushing in Class 3A and has racked up 1,110 yards on 107 carries for 10 touchdowns.

Isaac Dixon is Belfry’s third option to carry the ball. He has accumulated 967 yards on 81 carries for 10 touchdowns. As a team, the Pirates have rushed for 57 touchdowns.

The Bobcats have powered their way to a 14-0 record, outscoring their opponents by a wide margin of 624-161. Bell County is a much more balanced team than Belfry, but also bolster two 1,000 yard rushers. Brandon Baker leads the Bobcats in rushing with 1,404 yards and 17 touchdowns, and is averaging 100 yards per game. He currently ranks 17th in Class 3A in rushing.

Quarterback London Stephney has racked up 1,140 yards and 15 touchdowns, best for 29th in Class 3A. Stephney has also had a very efficient season through the air. He has only three interceptions in 124 attempts. He is completing 64% of his passes and has racked up 1,500 yards and 19 touchdowns through the air. In passing, he ranks 13th in Class 3A.

Belfry is allowing 13.6 points per game defensively through their 13 games this season. They have nine takeaways on the year, eight of which are interceptions by Isaiah Birchfield. He has returned two interceptions for touchdowns this season.

Bell County is allowing 11.5 points per game through 14 games. They have 26 takeaways on the season with five of those being returned for touchdowns. Defensive back Jonathan Lankford ranks fourth in Class 3A in interceptions with seven, one spot behind Belfry’s Burchfield.

The Bobcats have 72 tackles for loss this season to accompany 21 quarterback sacks. Bailey leads the team in tackles with 126 on the year. He also has four tackles for loss and one sack, good for 21st in the Class 3A rankings.

The Bobcat offense is the most prolific in the state in Class 3A. Their 624 points and 44.6 points per game average are the best in the state. Belfry has the class’ third ranked defense, one spot behind Bell County, who has the second ranked defense.

The Bobcats are also the winning by the widest margin of victory amongst any 3A school all season, defeating their opponents by an average of 33.1 points per game. Belfry edges Bell County in rushing, ranked second in Class 3A. The Bobcats have the fifth best rushing attack in the class.

Bell County is also ranked 12th in rushing defense to the Pirates 17th place ranking. The Bobcats are the 14th best passing team in 3A. Each team’s passing defense ranks inside the top three with Belfry being in second place and Bell County sitting at third.

The Bobcats rank ninth in sacks, 23rd in fumble recoveries and sixth in interceptions. Belfry ranks 14th in sacks but does not appear in the state leaders in takeaways.