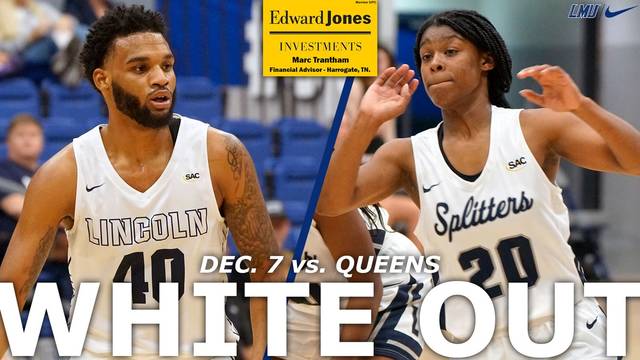 LMU will offer free admission to anyone who wears white to the Railsplitters and Lady Railsplitters’ home game on Dec. 7.

HARROGATE, Tenn. — The Lincoln Memorial University men’s and women’s basketball team’s South Atlantic Conference doubleheader on Dec. 7 versus Queens University of Charlotte, presented by Edward Jones Investments – Marc Trantham, has been deemed as a white out. Fans and supporters of the Railsplitters and Lady Railsplitters are encouraged to wear white in order to receive free admission to the games.

Tip-off of the women’s game is slated for 2 p.m. from inside B. Frank “Tex” Turner Arena, while the men’s game will follow at 4 p.m.

The Railsplitters’ game with the Royals should be a top-25 matchup as the LMU men are currently ranked No. 9 in both national polls and Queens is ranked No. 11 in the D2SIDA Media Poll and 12th in the NABC Top 25.

In addition to LMU offering FREE admission to the games to those participating in the white out, 400 complimentary tickets will be available the week of the doubleheader courtesy of Marc Trantham, Edward Jones Investments. The complimentary tickets will be available for pickup the week of the game in the LMU athletics office, located on the first floor of Tex Turner Arena.

Union men’s basketball checks in at No. 21 in…