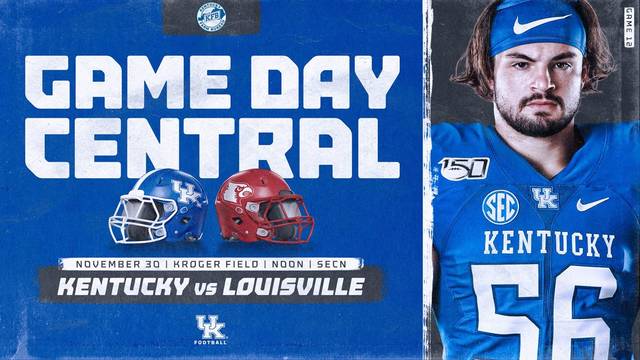 Fresh off becoming bowl eligible for the fourth consecutive season Kentucky will close out the regular season against rival Louisville this Saturday. The game is set for a noon ET kickoff and will air on the SEC Network. The Cats will honor 11 players before the game on Senior Day in what is their final game at Kroger Field. With a win the group would be a part of four consecutive seasons with at least seven victories.

Lynn Bowden Jr.’s onslaught on defenses continued last week with his fifth 100-yard rushing game in six starts at quarterback, tying Mike Fanuzzi for the most by a QB in school history. Lynn Bowden has the most rushing yards by a Kentucky player in a six-game span (852) since Moe Williams in the final six games of the 1995 season (926). He needs 49 yards to reach 1,000 for the season.

The UK defense also has shown stark improvement and continues to give the team a chance to win despite its inexperience on that side of the ball, particularly in the secondary. It has held six consecutive opponents to 305 total yards or less, the best such stretch since 1977, and allowed just 402 total yards to Vanderbilt and Tennessee Martin the past two games.

In introducing himself to the Big Blue Nation, Mark Stoops didn’t hesitate to embrace the importance of Kentucky’s rivalry with Louisville.

Seven seasons spent building a program to the point where it is now bowl eligible for the fourth consecutive year have done nothing to deter that mentality.

“I don’t think there is any denying when you are playing a rivalry game that it is important,” Stoops said. “I have said that since day one. I understand the importance to our fan base and our community and our state and our team. It is always important.”

Now set to face the Cardinals for the seventh time under Stoops, the Wildcats have won the annual showdown for the Governor’s Cup two of the last three seasons. UK (6-5, 3-5 SEC) did so in dominant fashion a season ago in Louisville with a 56-10 margin of victory, but the Cardinals (7-4, 5-3 ACC) are a much different team in Scott Satterfield’s first season as head coach.

“Rivalry week is here and need to continue that and play a very good game here this week,” Stoops said. “Coach Satterfield and their staff have done a remarkable job this year. This team is playing hard and playing good, so we have to be ready for a big game.”

After starting the season 2-3, every game has been a big one for the Wildcats of late. It bodes well, then, that UK is 4-2 over that stretch having been competitive in every game and winning three in blowout fashion. The Cardinals, meanwhile, have won three of four games behind a big-play offensive attack…Read More

• Louisville is 7-4 on the season, including a 5-3 mark in Atlantic Coast Conference play.

• First-year Louisville coach Scott Satterfield has proven to be a winner, having won 51 games in six seasons at Appalachian State. While there he led the program to four straight bowl games and scored at least nine wins in each of his final four seasons.

• The Cardinals have been one of the most improved teams in the country after winning just two games last season.

• Louisville’s offense has been explosive, ranking in the nation’s top 30 in scoring and total offense. The unit has been extremely balanced while averaging at least 214 yards rushing and passing each this season.

• Although the Cardinals have had some juggling of quarterbacks they have settled on Micale Cunningham, who has thrown for 19 touchdowns against just four interceptions.

• Running back Javian Hawkins has rushed for over 1,200 yards and ranks 11th nationally at 116.2 yards per game on the ground.

• Receiver Tutu Atwell has caught 57 passes for 1,072 yards and 11 touchdowns. Both the yardage and touchdowns rank in the top 10 nationally.

• The Cardinals’ defense has allowed a lot of points and yards per game but also has repeatedly come up with big plays when the team needed them most.

• The state rivals play for the Governor’s Cup trophy.

• The Cats have won two of the past three meetings, including a 56-10 win to cap last year’s regular season schedule.

• In that game, the 46-point margin was the largest in Governor’s Cup history.

• UK allowed just 10 first downs and 79 yards passing in the game while piling up 610 yards of total offense itself.

• In 2016 the Cats’ stormed into Papa John’s Cardinal Stadium and secured a thrilling 41-38 last second victory over the No. 11 Cardinals, ending a five-game losing streak to Louisville in the process.

• At the time, the win was the Cats’ first road win over a ranked team since 2002, which also came against Louisville.

• The modern version of the Governor’s Cup rivalry began in 1994 after a 70-year hiatus and has been played each of the past 25 seasons.

• The Governor’s Cup was created in 1994 as the trophy for the winner of the Kentucky-Louisville game. Donated by The Kroger Company at a cost of $23,000, the Governor’s Cup stands 33 inches tall and weighs 110 pounds. The trophy’s base and upright columns are hand-milled black marble. The glass components are optic-grade crystal. All metal parts are 23-karat, gold-plated brass. The cup itself is made of pewter with a 23-karat gold-plated finish.

• The cup was designed by Kendall Costner and sculpted by James Corcoran of Bruce Fox, Inc. The Kroger Company also is involved in supporting academic pursuits at the schools. Kroger is donating $10,000 to each school for each year the game is played. Including this year, Kroger’s donations now total $500,000 — $250,000 to each school.

• Louisville has three players from the city of Lexington on its roster: S Jack Fagot, WR Micah Lowe and WR Jordan Thomas.

A UK Win Would…

• Give Kentucky at least seven wins for the fourth consecutive season.

• Make Kentucky 4-1 and over its final five games of the regular season.

• Be the second consecutive win over Louisville and third in the past four meetings.

All-Southeastern Conference defensive end Jeremy Jarmon and former quarterback Dusty Bonner will be alongside host Christi Thomas for the Don Franklin Auto Countdown To Kickoff, the two-hour pregame show that airs prior to each UK football game in 2019.

A live video broadcast of Countdown to Kickoff will air on UKAthletics.com, the UK Athletics mobile app and the Kentucky Football Facebook page.

For home games, Countdown to Kickoff will broadcast live in front of Nutter Field House outside Gate 1 of Kroger Field with special guests and giveaways. The set of the show is conveniently located near the Coke Fan Zone in Nutter Field House and the Cat Walk presented by Chevy.