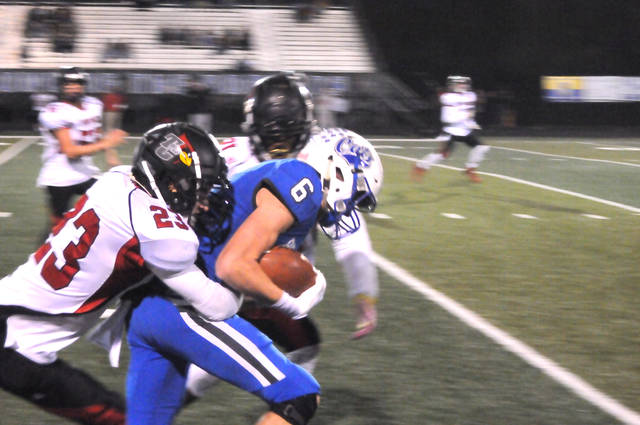 Cameron Burnett works upfield for a big gain early in the game against Taylor County. Bell County defeated the Cardinals 46-28 to advance to the state title game.

After downing the Taylor County Cardinals 46-28 in the state semifinals on Log Mountain Friday, the Bell County Bobcats have punched their ticket to the state championship game to take on the Belfry Pirates at Kroger Field in Lexington.

The Bobcats wasted no time getting things going on offense. They started on the ground with four straight rushes before going to the air for a 21-yard gain from Cameron Burnett to set Bell County up at the Cardinal 33-yard line. On the ensuing play, William Dean punched in a 33-yard rushing touchdown, granting Bell County a 8-0 lead after a successful 2-point conversion from Hunter Bailey.

Taylor County started the game by utilizing their running backs and quarterback. Their first play from scrimmage resulted in a gain of 27 yards. However, the Bobcats forced the Cardinals into a long third down after Tre Goodin hurdled a standing Bell County defender. The Bobcats regained possession after a short punt.

Facing a third down and 15, London Stephney was able to scramble for a gain of 17 yards, giving the Bobcats a fresh set of downs. On the following play, Bell County struck pay dirt again on a 43-yard passing touchdown from Stephney to Jones, extending the Bobcats’ lead to 14-0.

Another big run from Goodin gave the Cardinals great field position deep in Bobcat territory. After holding Taylor County to a fourth down, the Cards elected to go for a field goal that was missed wide right.

After regaining possession, the Bobcats worked their way down field behind the legs of Stephney. With the ball on the 3-yard line, Bell County attempted a rush into the end zone, which was fumbled but recovered by lineman Tim Lawson for the touchdown to give the Bobcats a 20-0 lead.

Taylor County finally worked their way back into the red zone on a 43-yard pass from Goodin to Gabe Burrus. Two plays later, Wes Oliver found his way into the end zone with just under 11 minutes remaining in the second quarter, chipping away at the lead 20-7 after a successful PAT.

After the Bobcats failed to build on their lead on the next possession, Taylor County brought the score to within one possession as Goodin snuck into the end zone from one yard out, bringing the score to 20-14 just before the half.

Each team traded touchdowns in the third quarter with Bell County striking first on a passing touchdown from Stephney to Dean. The Cardinals answered with a pass from Goodin to Burruss keeping Taylor County in the game.

An apparent touchdown run by Stephney late in the third was called back as he was called out at the 12-yard line. On the next play, Dawson Woolum darted 12 yards upfield to add to the Bell County lead, 32-21.

With Taylor County driving, Stephney intercepted a desperation pass and returned it for a touchdown of 53 yards, giving Bell County a 38-21 lead. However, the Cardinals wouldn’t go away as they found the end zone yet again on another four yard rush by Goodin, bringing the score to 38-28 after the PAT.

Stephney added another touchdown on a 44-yard rush to ice the game away with just over five and a half minutes remaining in the game, allowing the Bobcats to post an 18-point victory and punch their ticket to the state championship game.