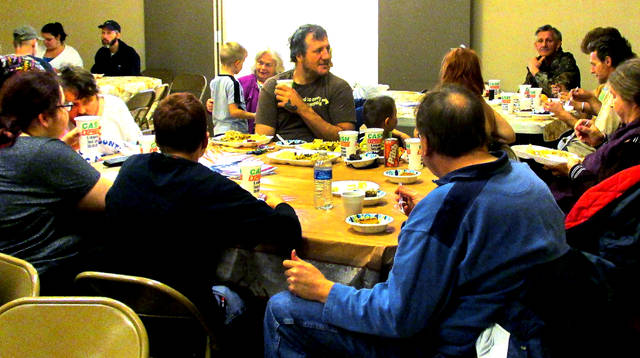 A team of volunteers served up more than 400 hot meals in Middlesboro during Thanksgiving week.

Almost 400 Thanksgiving meals were served to members of the community in need of assistance on Wednesday night at the Salvation Army of Middlesboro and Southeast Kentucky. This tremendous act of servitude came just one day after another heartfelt act.

“Not only do we feed people here, but we feed others at Old Yellow Creek. Last night, we served close to 300 meals there as well,” event organizer Nina Shoemaker said. “It’s a servant’s heart, I think that’s what our community is about. We’re a small town and we love our own.”

Organizers first had to overcome some suspicion and trepidation before convincing such a large number of people to show up and be taken care of.

“We are talking months to get their trust to where they were finally like, ‘You must love us and we are worthy’ because when we first started they wanted to know why we were doing this for them and what we get out of it,” Shoemaker explained. “What I get out of it is simply the joy of seeing them being fed and not have to dig through the garbage can.”

Shoemaker created a post on the Salvation Army’s community care outreach page on Facebook and within just two days later the menu for the dinner was completed.

Several people who took part in the meal anonymously expressed their gratitude.

“I’ve been homeless since I was 18, and this means so much to be able to come here and have a meal and get warm,” one woman said. “Because being out on the street, you just don’t know when you’ll get a full meal and you are looking for somewhere just to get warm.”

A man who was there to enjoy the meal and companionship explained that he had been coming to the Salvation Army for food and warmth for several months. “I look forward to coming here not only to get something to eat but to be around other people,” he said. “This place is a safe place and they take care of us.”

Shoemaker said the meal program started over more than a year ago in October 2017.

“We were actually outside with just a cooker and soup,” she explained. “We had such a big outpouring that St. Mary’s Episcopal Church stepped up and said come on in. East Cumberland then said ‘we’ll open our doors to you, so we served and worked with them for a long time.”

The Salvation Army then invited Shoemaker and her group of volunteers to serve meals there.

Shoemaker says there’s nothing like giving back or serving someone.

“Until you do, you’ve not been blessed,” she said. “I get a blessing every time I see their faces.”

The group also delivers approximately 145 meals to shut-in senior citizens two nights a week and only have two drivers to make the deliveries.

“We need volunteers, and we always take donations,” she said.

Shoemaker said they take food donations, but what they really need most is carry out supplies for the food deliveries. Donations can be made at the Salvation Army at 118 18th Street in Middlesboro.

Fire hydrants out of service throughout Middlesboro