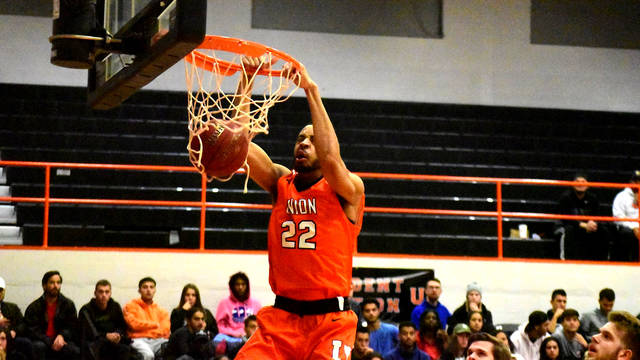 Jacob Cawood throws down a dunk for two of his 23 points against Milligan on Tuesday.

BARBOURVILLE — It was another night with plenty of peaks and valleys, but as has been the case lately, No. 17 Union College came out on top, winning 85-75 over visiting Milligan College (Tenn.) in Appalachian Athletic Conference (AAC) play on Tuesday.

The pendulum swung in favor of both teams as each held double-digit leads in the first half. Hitting four of its first six 3-point attempts, Milligan jumped out to a 21-9 lead with 12:38 to go in the half. However, Union got hot and took its first lead at 28-27 after back-to-back buckets from Richard Brown. The Bulldogs eventually stretched their lead to 46-35, but the Buffaloes scored the last three points of the period to make it 46-38 at the break.

In all, the lead changed hands nine times with the score being tied on five occasions.

But then, the Bulldogs took over.

A Jakobe Wharton 3 leveled the score at 73-all and jumpstarted an 8-0 run. Austin Cummins followed with a 3-pointer of his own to give Union the lead for good, while Isiah Knight buried two free throws to make it 78-73 with 2:10 to play. Milligan cut the margin to 78-75, but Union finished the game by going 7-of-8 at the foul line to seal the 85-75 victory.

Despite playing a little under 18 minutes due to foul trouble, Brown collected 17 points on 8-of-11 shooting from the floor. He also produced four rebounds and a block.

Nick Marshall was close to a double-double with eight points and eight rebounds.