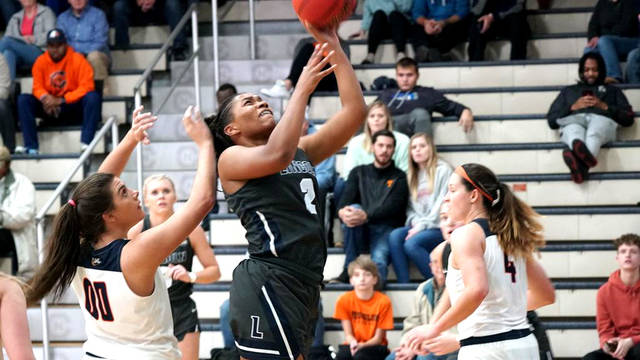 Semajia Ogburn goes in for a layup against Carson-Newman. She finished the evening with eight points in 22 minutes of action.

JEFFERSON CITY, Tenn. – An ice cold start by the LMU women’s basketball put them in a hole that they were never able to get out of as they fell to host Carson-Newman 85-58 in a South Atlantic Conference game Tuesday evening.

• After trailing 12-0, LMU rallied back scoring 18 of the next 25 points to cut the lead to 19-18 with less than a minute in the first period on the driving layup by Semajia Ogburn;

• After LMU cut the lead to one, C-N hit back-to-back 3-pointers to close out the quarter with the 25-18 lead;

• A pair of free throws from LMU’s Sydney Newsome would cut the deficit to 27-20, but LMU would go cold for the next eight minutes. C-N scored 14 unanswered points in that time frame;

• All of LMU’s 10 second-quarter points came from Newsome (5) and Lindsay Proffitt (5);

• Back-to-back baskets by Ogburn and Lauren Flowers to open the third quarter would cut the lead to 14, but that was the closest LMU would get the rest of the game.

• Shermeria Quarles and Flowers had nine points each, while Newsome, Proffitt, and Ogburn chipped in eight points apiece.

• Lexi Kiser had a career-high six assists to lead all players.

• Ogburn led LMU with 11 rebounds. The freshman has had double-digit rebounds in her last two appearances.

LMU travels to Coker to close out the four game road swing with a SAC contest against the Cobras at 2:00 p.m. Saturday afternoon. The Cobras are 2-2 after falling at Wingate by 10 points this evening.

Railsplitters run by Wingate 113-76 on the road Saturday