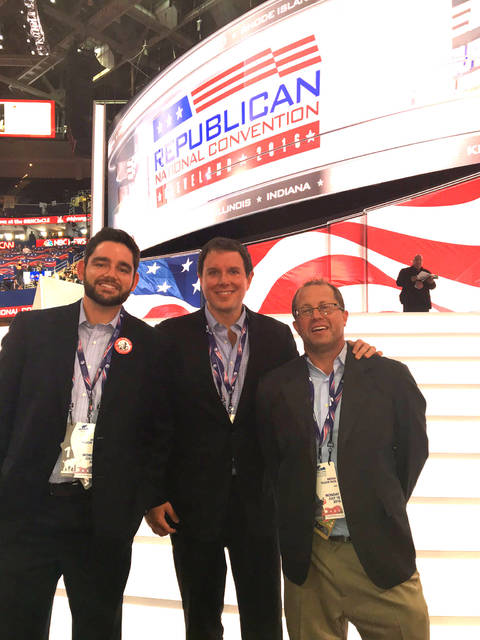 Matt Jones, center, stands with KSR co-hosts Drew Franklin, left, and Ryan Lemond during the 2016 National Republican Convention. On Monday, Jones announced that he re-signed with iHeart Media to continue doing KSR for another five years.

Everything has come full circle for Middlesboro native Matt Jones. After a whirlwind of a year that involved flirtation with the 2020 U.S. Senate race, the avid Kentucky fan will continue doing what he does best — talking about Kentucky sports on the radio.

Jones announced on Twitter Monday evening that he has re-signed with iHeart Media to do Kentucky Sports Radio for five more years.

The news comes just a few days after he announced that he was nominated for Kentucky Sportscaster of the Year by the National Sports Media Association.

Jones’ year has been one of ups and downs. On Nov. 15, he announced his decision to not run in the 2020 U.S. Senate Democratic primary against Amy McGrath.

“It is a very difficult decision. It’s one that I have literally been thinking about for two years and have really agonized about for the last four or five months,” said Jones in a statement about the race. “I have studied it. I’ve got advice from everyone that would talk to me. I prayed about it, and it was something I went back and forth on. I made this decision because it was the best decision for me personally at this time.”

On Nov. 6, Jones was forced off Kentucky Sports Radio after the Republican Party of Kentucky filed a complaint with the Federal Election Commission claiming he received illegal campaign contributions from his employers and failed to properly disclose them.

Earlier this year, LEX 18 forced Jones to step down from his TV show “Hey Kentucky!” shortly after he announced his book deal with Simon and Schuster. The book he will be writing is titled “Mitch, Please!”