Minton arrested after brawl with police 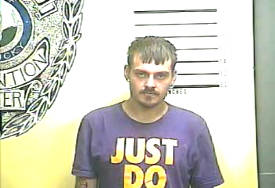 A Middlesboro man is behind bars after trying to allegedly flee Walmart with outstanding warrants.

Ronnie Minton, 27, of Middlesboro, was arrested by officers with the Middlesboro Police Department and charged with second-degree fleeing or evading police (on foot), third-degree assault (police officer or probation officer), resisting arrest and second-degree disorderly conduct.

According to the arrest citation, MPD was dispatched to Walmart after reports of a suspicious male inside the right lobby entrance. As officer Chris Barnes saw Minton, he knew the individual had outstanding warrants for his arrest.

The citation states as Barnes and officer Dakota Torstrick were trying to confirm the warrants through dispatch, Minton “took off running” and hit Torstrick “about knocking him to the ground.” Minton then fought both officers until they finally got him detained with “all kinds of customers walking by and almost getting hit” during the struggle.

Minton was also served four outstanding warrants. He is being at the Bell County Detention Center without bond.

Others recently arrested on felony charges include: