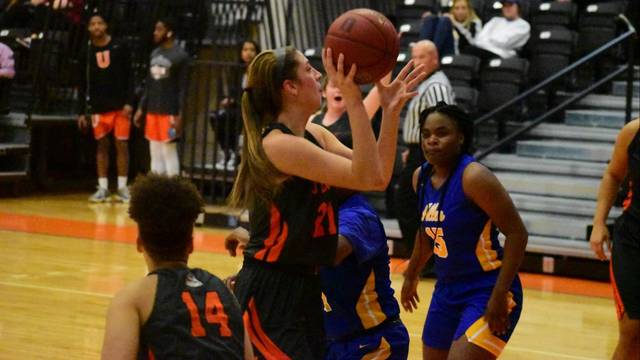 Heading into the final period, Union found itself trailing 52-46. The Cavaliers upped the margin to seven before the Bulldogs went on a 12-4 run to take a 58-57 lead following a Logan Calvert bucket with 4:30 to play.

Montreat briefly regained a one-point lead, but Union ripped off seven consecutive points for a 65-59 advantage with 1:43 remaining. The Bulldogs never trailed again.

The Cavaliers cut the margin to 66-62, but the Bulldogs hit all four of their free throws during the final 22 seconds of the game to close out the 70-62 conference win.

Brooke Hammonds logged her fifth double-double of the season with 17 points and 11 rebounds. She went 2-for-3 from behind the arc and buried all seven of her free throws. The junior also dished out a team-best seven assists.

“So proud of the fight we showed today on the road. We needed this,” said head coach Dean Walsh. “We needed to prove to ourselves that we are capable of being good on the road. They worked hard at committing to being a team and defending this week.”

Union won the battle on the board, outrebounding Montreat 34-30.

Both teams attempted 23 free throws with Union making 19 and Montreat 14.