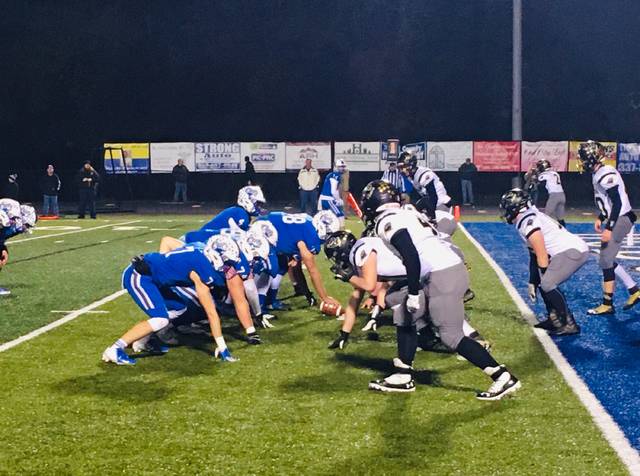 The Bell County Bobcats took down the Fleming County Panthers in the third round of the KHSAA Class 3A playoffs on Log Mountain Friday night.

The Bell County Bobcats rolled to a 48-12 victory against the Fleming County Panthers in the third round of the KHSAA Class 3A playoffs. With the victory, the Bobcats improve to 13-0 on the season and advanced to the state semifinals on Log Mountain next week.

A potent offense with six different players scoring and a disruptive defense proved to be a winning recipe for the Bobcats as they imposed their will on offense throughout the game, while simultaneously limiting a high-powered Fleming County offense to minimal yardage.

Bell County got off to a hot start against the Panthers as their second play from scrimmage went for a 63-yard touchdown on the legs of Dawson Woolum. After a successful 2-point conversion, the Bobcats led 8-0.

The Panthers answered on their next drive. After a big pass from Jonathan Maher, Fleming County connected on a 6-yard passing touchdown. They failed to convert the following 2-point attempt, which allowed Bell County to hold on to a slim two-point lead at 8-6.

After regaining possession, the Bobcats got back to work. Wasting no time, William Dean scampered 34-yards into the end zone four plays into the drive to give Bell County a 14-6 cushion. Bell extended their lead to 16-6 after a successful 2-point conversion.

With things beginning to favor the Bobcats heavily, the Panthers put together a solid drive on their ensuing possession. However, the drive was halted as Chandler Mink came down with an interception around the Bobcat’s 25-yard line, which he returned deep into Fleming territory leaving Bell County with great field position at the 13-yard line.

Two plays later, Brandon Baker hit pay dirt from two yards out, extending the Bobcat lead to 24-6 after another successful conversion with 2:39 remaining in the first quarter.

With one minute remaining in the half, Fleming County was able to punch in a touchdown on a quarterback sneak by Maher, chipping away at the Bell County lead. The Panthers failed to convert the 2-point attempt, which allowed the Bobcats to maintain a 24-12 lead.

With just 35 seconds remaining on the clock, the Bobcats took over deep in their own territory. Two electric runs and a bit of good fortune for London Stephney allowed Bell County to have great field position with five seconds left until the half.

On the third play of the drive, Stephney connected with Jason Jones on a 22-yard passing touchdown. After another successful conversion, the Bobcats extended their lead back to 32-12, deflating the Panthers.

The Bobcats added a touchdown on a 22-yard pass from Stephney to Cameron Burnett and a 50-yard pick six from Jonathan Lankford, giving Bell County the necessary lead to impose a running clock and secure a 36-point victory over Fleming County.

The Bobcats will host Taylor County next week on Log Mountain. The game will be played for a chance to advance to the state championship.