Positive updates were given at city council meeting 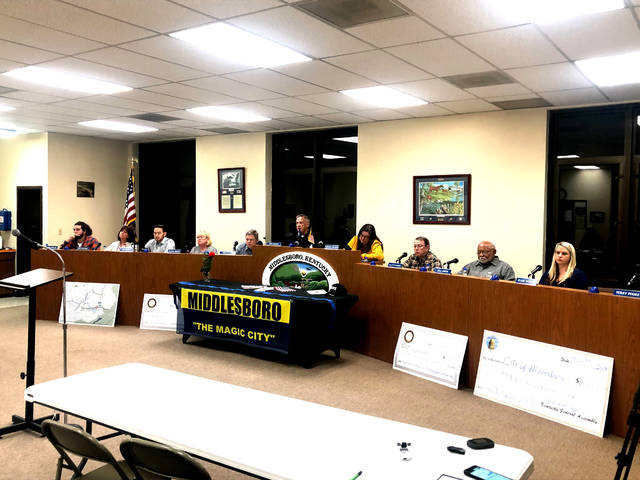 Many positive updates were given at Tuesday night’s Middlesboro City Council meeting including the passing of the first reading of an ordinance for abandoned vehicles in the city.

Many positive updates were given at Tuesday night’s Middlesboro City Council meeting including the passing of the first reading on the ordinance for abandoned cars.

Councilman Bo Green read the ordinance amending Chapter 96 of the code of ordinances for the city of Middlesboro regarding the abandoned cars.

“We’ve been studying this for a couple of months now,” Green said. “The council has been working with the mayor, Tim Kelley, the Codes Enforcement Officer, trying to figure out the best way to do this. We looked at the existing ordinance and we really just needed to update it. It was outdated with some of the definitions and some of the enforcement roles. So, basically the biggest change is that we’ve added the enforcement roles to the codes enforcement as well as the police.”

He added that they’ve added penalties to be handled by the codes enforcement board.

“Our goal is to make an impact on some of the abandoned vehicles that’s littering out streets,” Mayor Nelson explained. “We want to give people the chance to look this over.”

The mayor said they are not singling out any specific street, but he’s counted more than 25 abandoned cars on Chester Avenue.

“I want to put it into a motion that we adopt this first reading of the ordinance,” Green said.

Green’s motion was seconded by councilwoman Glynna Brown, and the council agreed unanimously to adopt the first reading of the ordinance.

The ordinance reads: “Chapter 96 Abandoned Vehicles Section 96.01 through 96.07 with definitions of abandonment of vehicles, leaving of wrecked or junked vehicle on street, disposition of wrecked or discarded vehicles, impounding, notice, and lien.”

“I think this is a good ordinance to have, and I think the vast majority of people will appreciate this,” Nelson said.

In other council news, councilwoman Judy Grandey presented 1909 Cumberland Avenue as a property that is applying for the tax incentive program.

“The big deal about this is when a person agrees to fix up a business, they probably have a low value on that property. If they spend $1 million to fix it, for five years, they only pay what the initial tax value is,” Nelson explained. “I think it’s a good deal for these property owners.”

The council agreed to accept the application of 1909 Cumberland Avenue.

During Codes Enforcement Officer Tim Kelley’s update, he informed the council that they are now working on their ninth property cleanup.

“I do want to thank Kevin (Barnett) for reporting on the demolitions,” Kelley said. “Just a little bit more clarification, we have got house No. 9 on the ground, but we’ve got to turn in the smaller excavator. We will get that property cleaned up before we go on to another. We have probably 15 or 16 that are prepared and ready to be torn down as soon as we can get to them.”

He explained that they are going to continue going and get as many of them torn down as they can.

The council also voted on the second reading of the consideration of amending the personnel policy ordinance to create the position of captain for the Middleboro Police Department.

All department reports were accepted by the council, and Mayor Nelson announced that there will be three public hearings held on Dec. 9 at 1 p.m. in front of the variance board.

Middlesboro preparing for the holiday season