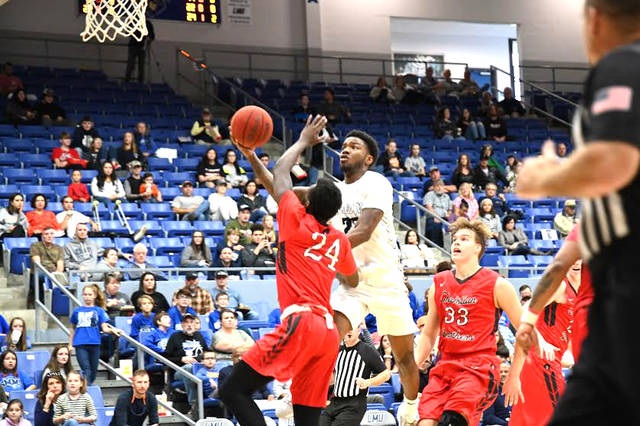 Kamaran Calhoun gets to the lane during Saturday’s game against Christian Brothers. He finished with four rebounds, two assists and a steal in 11 minutes of action.

Limiting the visiting Buccaneers (1-2) to just 14 points in the first half, LMU shot 65.4 percent (17-of-26) in the final 20 minutes of action and went 7-for-14 (50%) from long range in the second half. Redshirt junior guard Devin Whitfield, a transfer from fellow NCAA Division II member Trevecca Nazarene in Nashville, had a breakout game with 21 points on 8-of-17 shooting, four rebounds, three assists and a steal.

Junior guard Alex Dahling was also impressive as the two combined for 40 points with Dahling collecting 19 by going 7-for-10 from the field and 5-for-8 from deep.

A jumper by Christian Brothers’ forward Jacob Lyons a little over 30 seconds in provided the Bucs’ with their only lead of the game before the Railsplitters took over. A traditional three-point play by Whitfield a little over 5:15 in put the home team in front 10-4.

LMU would outscore Christian Brothers 10-6 over the next 5:41. A fast-break jumper from redshirt sophomore guard Cameron Henry put the Railsplitters up by 10 with nine minutes to go in the half and a dunk by redshirt senior guard Kamaran Calhoun gave LMU a 24-12 lead at the 7:44 mark.

After the Bucs’ Lyons made a jumper in the paint with 7:02 remaining in the opening half, the Railsplitters would hold Christian Brothers scoreless until the 16:18 mark of the second half. Back-to-back buckets from Dahling, including a three-pointer, put LMU ahead 30-14 with just over five minutes to go in the first half. The Railsplitters continued their onslaught, outscoring the Bucs 15-0 across the final 7:02 of the half and taking a 26-point 40-14 lead into the locker room.

LMU’s defense limited Christian Brothers just 21.4 percent (6-of-28) shooting in the first 20 minutes of play as the Bucs were 0-for-7 from outside and committed 11 turnovers.

Despite a shaky first 3:30 of offensive play in the second half, the Railsplitters extended their run to 23-0 in order to go up 34 at 48-14. A pair of free throws by Christian Brothers forward Joshua Jackson finally broke the Bucs’ dry spell nearly four minutes into the second half and sparked a 15-6 run over the next three minutes by the visitors. A three-pointer by Christian Brothers guard Malik Jones made it a 25-point game at 54-29 at the 13:17 mark.

Over the next five minutes of play, LMU outscored the visitors 21-7 as Dahling connected on another trey to push the Railsplitters in front by 39 at 75-36. LMU went to its bench down the stretch and got terrific play from its reserves. A deep, contested right-wing three-pointer by freshman guard Jeremiah Keene gave the home team its largest lead of the day at 44 with 1:12 remaining and redshirt freshman guard MJ Armstrong threw down an electrifying two-handed slam on a pass from redshirt junior forward Shaquille Rombley in the closing seconds.

A total of four LMU players reached double-figure scoring with sophomore guard Courvoisier McCauley contributing 13 points and a career-high six assists. Keene was in action a valuable 19 minutes, scoring 11 on 3-for-4 shooting from outside, collecting three rebounds and assisting on three baskets. Senior guard Anthony Brown had nine points, four assists and three boards, while Henry finished with eight points and five rebounds.

The Railsplitters will have just two days off from game action before returning to Tex Turner Arena Tuesday night for a 7 p.m. tilt with Johnson University (Tenn.). The game will wrap up a four-game homestand as LMU begins South Atlantic Conference play next Saturday, Nov. 23 at Wingate in North Carolina.

No. 9 Kentucky gets another scare, holds off Utah…