No. 9 Kentucky gets another scare, holds off Utah Valley 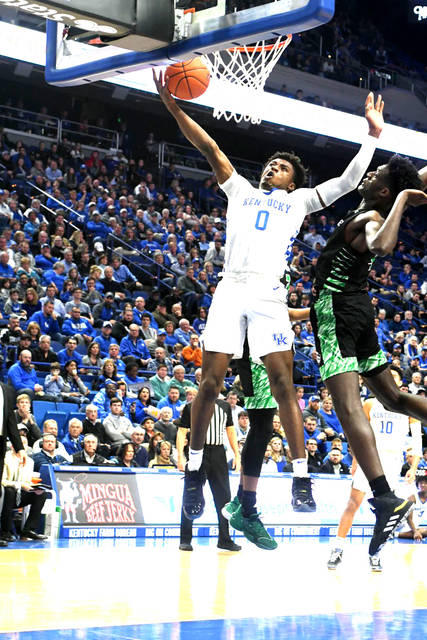 Ashton Hagans fights through contact on a layup during Monday night’s game against Utah Valley. He finished with 26 points, five assists and five rebounds.

LEXINGTON, Ky. (AP) — John Calipari breathed a sigh of relief after his team survived another scare.

Ashton Hagans scored a career-high 26 points, and No. 9 Kentucky fought through another close game against what should have been a lesser opponent, beating Utah Valley 82-74 on Monday night.

“I’m happy we won,” Calipari said. “This season as long as it goes and being here and knowing how teams play against us, and how they’re charged up and then the next game they don’t play as well … whew. I was trying to be as positive as I could be until the end. I couldn’t take it anymore.”

The Wildcats (3-1) dropped out of the No. 1 spot in The Associated Press Top 25 after losing at home to Evansville last week, and they had to overcome a late surge to hold off the Wolverines.

Kentucky led by 16 points early in the second half, but Utah Valley steadily chipped away until T.J. Washington’s 3-pointer got the Wolverines (3-2) within one at 68-67 with 3:26 remaining. Nate Sestina responded with a three-point play that helped the Wildcats pull away.

“We knew that coming in here Kentucky was going to be amped up and they were,” Utah Valley coach Mark Madsen said. “Kentucky did a fantastic job of executing their game plan and really making big plays down the stretch.”

Kentucky was without second-leading scorer Immanuel Quickley, who sat out because of a chest injury. Quickley has scored 16 points in each of the last two games.

The Wildcats also have been without forward EJ Montgomery, who has missed the past three games because of an ankle injury. Coupled with Quickley’s injury, Kentucky’s roster has dwindled to seven scholarship players, leaving the Wildcats short-handed in practice.

“We are who we are right now,” Calipari said. “We are what the score says we are. … We got to get E.J. back, got to get Immanuel back and figure out what we are.”

Hagans also has battled a leg injury this season, but he has remained consistent.

Nick Richards had 21 points and 10 rebounds, while Tyrese Maxey added 14 points for Kentucky.

Washington led the Wolverines with 22 points, followed by Trey Woodbury with 17 and Jamison Overton with 10.

Kentucky: The Wildcats are used to shooting free throws and averaged 29.7 attempts per game in their first three. Kentucky made 31 of 34 from the line against the Wolverines, including 14 of 15 in the first half. The Wildcats held a 46-27 edge in rebounding, including 34 on the defensive end.

Utah Valley: Just as Evansville did in its upset, the Wolverines spread the floor and forced the Wildcats to play defense in the open court. The Wolverines made 11 3-pointers to keep the game close.

“Those 3s that they made, gave them a chance to win,” Calipari said. “And then we had to come back and make free throws, which we did.”

The Wildcats play two more games this week and could move up a spot or two with three victories, although games like this will surely give voters pause. The Wildcats don’t play a ranked opponent again until they take on No. 10 Ohio State at Las Vegas on Dec. 21.