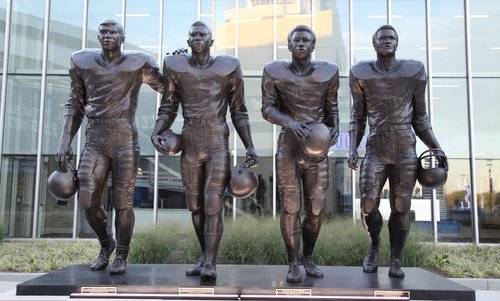 Photo courtesy of the Black in Blue creators

A statue by J. Brett Grill, located on the University of Kentucky campus, was dedicated in honor of football players Nate Northington, Wilbur Hackett, Houston Hogg and Greg Page for breaking the color barrier in the Southeastern Conference.

Black in Blue debuts in Pineville on Thursday

A documentary depicting the untold story of four University of Kentucky athletes who broke the color barrier in the Southeastern Conference will be making its debut at the Bell Theater in Pineville on Thursday beginning at 7 p.m.

The movie, under the direction of Paul Wagner, former UK quarterback Paul Karem and Ellen Wagner, will be available for viewing free of charge on Thursday to those wishing to watch the story of the players who changed the Southeastern Conference forever. More screenings will also be held across the country.

The story of the four begins when Northington became the first black scholarship athlete to play sports in the Southeastern Conference on Sept. 30, 1967. Before he played against Ole Miss later that season, one of his best friends (Page) had died, leading Northington to quit the team and leave the college three weeks later.

After Northington left, two other black players were recruited to UK (Hackett and Hogg), who would face racism on the UK campus and while on trips to away games further south. Their courage would eventually link both black and white players and integrate people of all backgrounds at UK and across the south.

The names of these four athletes may also sound oddly familiar to anyone who visits the UK campus frequently, most likely because a statue located on the campus by J. Brett Grill was dedicated in honor of the football players.

Black in Blue was produced by American Focus, a nonprofit organization “dedicated to telling the story of America on film.”

For more information on the movie, visit the Black in Blue website.